The Re-Branding of Blackwater

In 2007, Blackwater Worldwide, the world’s largest private security company, made the wrong kind of headlines when Blackwater contractors allegedly shot and killed 17 Iraqis in a crowded square in Baghdad. This resulted in protests, congressional inquiries and the Iraqi government refusing to allow the organization to operate in the country. And now, in an effort to improve public perception, Blackwater has changed its name to Xe (pronounced ZEE).

Organizations that change their name usually do so to “better define” what they do, or to “clarify” a shift in services, and this is often in tandem with a repositioning of services or a shift in core competencies. Anne Tyrrell, a spokeswoman for Blackwater, explained that the company was changing its name because “the idea is to define the company as what it is today and not what it used to be.”

The Blackwater name has being expunged from all of its business units: Blackwater Airships (which offers surveillance services for intelligence gathering) has become Guardian Flight Systems. Blackwater Target Systems (the unit that develops and builds targets) is now being called GSD Manufacturing, and Blackwater Lodge and Training Center has been named the U.S. Training Center.

Not everyone agrees with Tyrrell. RJ Hillhouse, a national security expert and author of the blog called The Spy Who Billed Me, said the company is “obviously trying to distance itself from their image as reckless cowboys that’s etched into the world’s mind from the…shooting.” With a new name, “there are a lot of people who probably won’t connect the dots,” she said. “In a year or two, people won’t remember that’s Blackwater.” 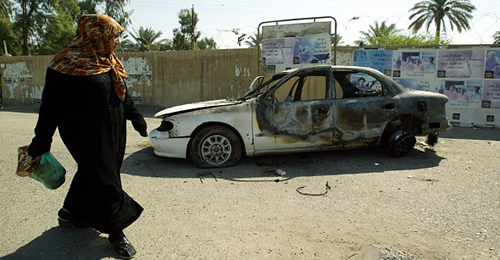 When asked about the name change, Robert Passikoff, president of the New York marketing research firm Brand Keys, Inc. offered this: “There’s an old saying about brands: ‘When you can’t change the product, you change the packaging,’” he said. “It’s common for companies to rename in an effort to distance themselves from bad publicity, but in Blackwater’s case, things have gotten so bad that the company had little choice but dump the brand.”

Tyrrell disagrees. She countered that Blackwater’s past was only one of several factors involved in the decision. “The company leaders came up with and considered several new names,” she said. “Xe had the best potential for brand identity but has no special meaning,” she added.

No special meaning indeed. The same can be said for the identity, which is a bizarre cross between the old Xerox brandmark and the logo for Xena: Warrior Princess. As a result, the only X this rebrand deserves is for a new identity that has gone terribly, terribly wrong.

Debbie Millman is a board member of the National AIGA, and teaches at the School of Visual Arts and Fashion Institute of Technology. She is also an author on the design blog Speak Up, a regular contributor to Print Magazine and she hosts a weekly internet radio talk show on the Voice America Business network titled Design Matters. This article originally appeared on the Brand New blog.