Victory for Activists, Animals & Environment as Proposed LNG Island is Shut Down! 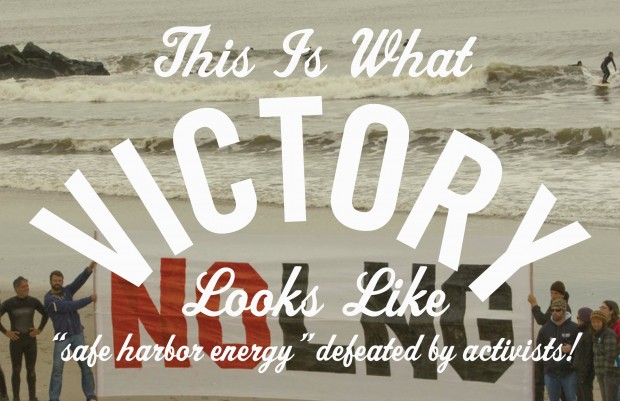 After an 18month+ campaign by activists in the Northeast the proposal to build an Liquid Natural Gas terminal and artificial island 13 miles south of Long Beach has been shut down!

In April of 2009 The Sparrow Project partnered with Clean Ocean Action, The Surfrider Foundation, local environmentalists, politicians, and artists in an effort to raise awareness about and eventually challenge the LNG island proposal.  Specifically, the plan included the building of an artificial island comprised of dumped construction waste 13 miles south of Long Beach, New York, large enough to allow two Liquid Natural Gas tanker ships to dock at the same time, and the construction of a connecting pipeline that would route the re-gassed LNG inland to the Northeast.  At it’s heart, the proposal put forth by a consortium of investors calling themselves “The Atlantic Sea Island Group” catered to fossil fuel special interests whose primary objective was the control, price regulation, and trade over this green-washed fuel.  LNG is almost always foreign, it is liquified for the purposes of compressing it and sending it across oceans.   LNG, like crude oil, is often sourced from geographic locations where the political climate is one of violence and although natural gas burns cleaner than oil or coal, moreover the extraction process is at times far worse on the environment than that of oil exploration.  Hydraulic fracturing or “fraking” is the forced displacement of sub-terrainian gasses by the pumping of fluids under the earth surface.  Fraking at times will destroy entire water tables and aquifers, and here in the states is a procedure that is exempt from the standards set forth in th eclean water clean air bond act.  Lastly the area of proposed construction was that of the shallowest point along the Cholera Bank, the tri-state’s only hard bottomed reef ecosystem and a breeding ground for threatened sea turtles.  Collectively Long Islanders, activists, environmentalists, musicians, students and every-day folks joined the call to shut this project down before it could begin.

The Sparrow Project could not have done any of this without the help of local artists & activists Daniel Bobis, Cipher, Ryan Hunter and Envy on The Coast. Ryan and Daniel partnered with Sparrow to produce a video PSA against the proposed LNG plan (see attached video), Photo Finish records was kind enough to help us syndicate the video to their larger audience, and from that day forward the ball started rolling. T-shirts were printed, meetings were arranged with politicians, lecture after lecture was booked at local colleges, town halls, and green fairs, volunteers from Sparrow were even called to governor Patterson’s office to discuss the issue. After a great deal of hard work from David Byer at Clean Ocean Action, New Jersey governor Chris Christie stated at an Earth Day press conference that he would oppose the plan, putting the proposed plans required adjacent state consent at risk. The following month was a slippery slope for the Atlantic Sea Island Group, as NY state governor Paterson refused to issue a position on the proposal. In June of this year news came that the Atlantic Sea Island Group CEO Howard Bovers would be resigning and prospects for the proposed plan looked bleak. I remember getting the call while out on tour, and furthermore I remember wondering to myself if we truly had won. I was told to sit tight on the information until we had confirmation that the state application for the proposal was actually pulled.

A few weeks ago we received word that the application was indeed pulled and that yes, the activists won… I remember thinking to myself, “so this is what victory looks like?” The victory was bittersweet, knowing that part of the ASIG’s momentum was lost when the BP disaster took place, and that the government and corporate officials did not in whole pull their application because it was was the right thing to do, but rather because they felt they could not get away with it in the wake of the BP spill.

I got on the phone and immediately called Ryan, he was elated that his voice and the art that he and his band made were able to play a part in something so big. The efforts of Ryan, Envy On The Coast, Daniel Bobis and Cipher exemplify this idea of braiding arts with activism. Together their work, coupled with the efforts of the Surfrider Foundation and Clean Ocean Action managed to shut down a project as large as the Transocean Deepwater Horizon Facility in the Gulf. One can only imagine what the gulf would have looked like if there was never an explosion on the Deepwater Horizon and the subsequent spill that followed. 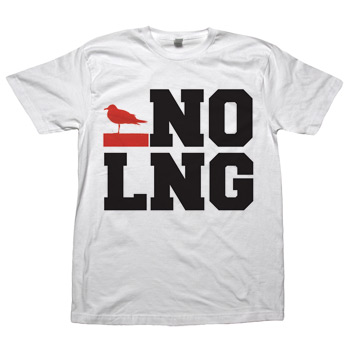 Nationwide this fight is far from over, fossil fuel companies are refusing to let go of their current infrastructure of trade and adopt renewable energy, their answer to post-peak oil prospects is increased gas exploration, and Liquid Natural Gas will quickly become their primary energy commodity for trade. Plans for installations like the Atlantic Sea Island are being proposed all over the country and it’s up to local activists to fight them wherever they rear their ugly heads.  To learn more about the LNG proposals in the Northeast please visit Clean Ocean Action’s website and if you are feeling bold you can buy one of these limited run t-shirts that benefit the efforts of Clean Ocean Action.