Uprooting the Garden of Hate

The Southern Poverty Law Center, long a bulwark against prejudice in the US, this past week added a number of organizations to its list of hate groups; organizations with innocuous-sounding names such as The Family Research Council and The National Organization for Marriage, whose appellations belie the truth behind their agenda. Couched in a Bizarro-world interpretation of Christianity, in which Jesus would somehow approve of war, capitalism and capital punishment, these groups are little more than an engine of intolerance and hate. Naturally, these good folk are apoplectic about their inclusion on the list, assuming the venerable status of victim and claiming that they are being unfairly targeted, in the words of FRC’s president, Tony Perkins, by a “liberal organization.” Once again, like environmental issues, the extreme right has managed to politicize something that, in reality is a universal concern: human rights. They sanctimoniously plead that they are not anti anything, but simply pro-traditional marriage. Really? Then how to explain this missive by Peter Spriggs, a senior fellow for policy studies at FRC? Earlier this year, Mr. Spriggs told MSNBC’s Chris Matthews that “homosexual behavior” should be made illegal. These aren’t words of hate, repression and prejudice? Neither were the Jim Crow supporters actually racist, right? I suppose that their practices of lynchings and wanton violence against African-Americans were actually a supreme expression of a commitment to justice and equality. 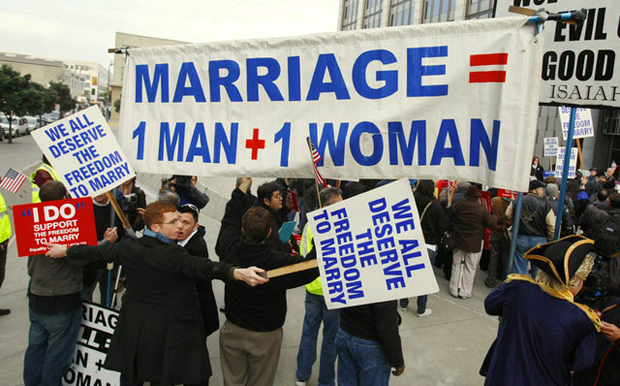 I’ll allow them to state their case, in their own words, with some examples of their “message of love”…

“There is a strong undercurrent of pedophilia in the homosexual subculture. Homosexual activists want to promote the flouting of traditional sexual prohibitions at the earliest possible age….they want to encourage a promiscuous society – and the best place to start is with a young and credulous captive audience in the public schools.” — Robert Knight, FRC

“Gaining access to children has been a long-term goal of the homosexual movement.”– Homosexual Activists Work to Normalize Sex With Boys: Family Research Council publication, July 1999

“You don’t have to eat the stale crumbs off the dirty floor, which is basically what lesbianism is.” – AFTAH (Americans for Truth) Web site interview with FRC’s Yvette Cantu

There is no taking these statements out of context, but if these quotes aren’t enough, there is no ambiguity to the following image: 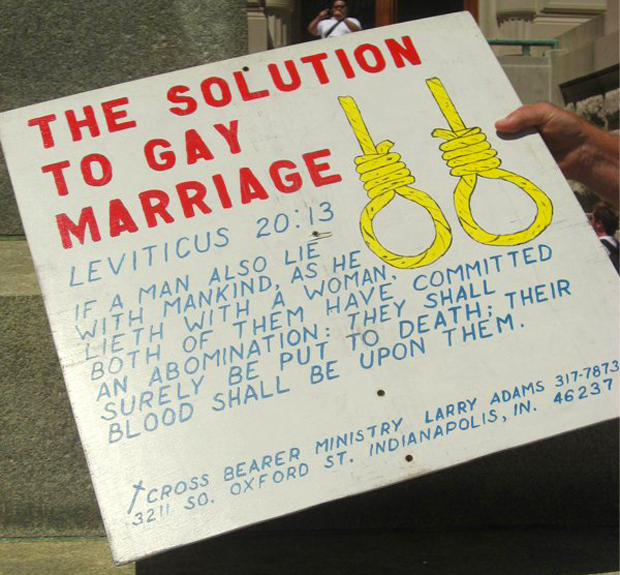 You get the idea. Naturally, I take issue with bilious and spurious sentiments such as these, but what makes them even worse is that they are presented as somehow being consonant with Christian values. As someone who has studied the bible, I defy these suppurating souls to cite where, exactly, Jesus ever addressed this issue, let alone made recommendations contrary to his one dictum, Love!

Did my Bible exclude the Gospel According to Fred Phelps? The one in which Jesus, donning fatigues and an M-16, rides in on an Abrams tank, Goldman Sachs stock certificates in hand, and sets up perimeters to defend the money changers in the temple? Then, just for good measure, stones a same-sex couple; two people who have the temerity to hold hands over a Starbucks Frappuccino, on Jerusalem’s Main Street? I know, it’s absurd, but so is the notion that these hate groups aren’t, in fact, espousing hate and that they are “victims.”

There are people on all sides of the political spectrum promoting half-truths and outright lies, but the radical right has mastered the art of convolution. Just look at their success in convincing poor and working people that it is in their interest to vote for candidates beholden to big business and banking—the very people who have eliminated their jobs and foreclosed on their homes. It should come as no surprise, then, that these same hypocrites would spew venom and cower in a cloak of innocence, crying that they are being unfairly targeted. I have no love for anyone who encourages hate, but at least I could offer a begrudging sense of respect for those who have the courage of their convictions. Many on the right in this nation aver that they aren’t racist or homophobic, yet their very words, while sometimes devoid of actual epithets, prove otherwise. It’s beyond time that they were called to task for their divisive and hateful rhetoric and actions. Bravo to the SPLC for its boldness.