Moe Mitchell contacted the Sparrow Project with an idea …a DIY, community-based response to the ongoing needs in post-earth quake Haiti. With the help of Greg Bennick of 100 for Haiti, Sparrow launched the “100 Shows For Haiti” campaign, within a few short weeks we planted seeds, the idea took root, you responded and raised $17,500 through events big and small. The following is Moe’s statement …an account that inspiration can be contagious and how one person’s idea became an ongoing project that we invite you to continue with.

At the end of last summer I had an opportunity to remove myself from my daily life and focus on reflection.  I spent several days in silent meditation, facing nothing but myself.  I thought this look inward would provide a better insight into my own consciousness, but I was surprised when I realized how many blind spots I had for other people and my connection with those people. I confronted the reality that I, and those around me, can do more to provide mutual aid, support, care, solidarity, and – dare I say – love to one another.  It was painful and humbling to confront my inconsistencies, but ultimately it spurred me to action.

I was reminded of the great loss in Haiti and my feeling of ineptitude in response to it.  The suffering was so great, how could one person be of any help?

I donated money but my efforts felt hollow. Surely I could have given more but I was troubled by the idea of giving to an organization that may use the funds in counterproductive ways or to advance a self-serving agenda.  I was worried about contributing to what Naomi Klein defines as ”disaster capitalism.” Disaster capitalism are efforts that corporations and governments make to exploit times of great crisis and can come in the form legislation limiting civil liberties during a time of war or billion dollar contracts offered to multinational corporations for disaster relief.  Unsure of the most responsible way to give my resources, I was paralyzed into inaction. This paralysis was a total cop out. Despite the potential pitfalls of charity, I realized that it was my responsibility to discover effective means of solidarity with the Haitian people by doing my homework on the groups or movements worth supporting, staying connected with them, initiating outreach to my community, and being publicly accountable.  When I returned from meditation I reached out to my friend Andy Stepanian of the Sparrow Project to collaborate on a week of actions and fundraisers to commemorate the anniversary of the earthquake.  Funds would support Haitian Women for Haitian refugees, a grassroots organization that has built a center in Léogâne to support the work of women in the aftermath. Instead of throwing one big effort, we would use the power of social media to inspire our entire network to take initiative. These new media tools, when used effectively, have proven to be powerful agents for spreading ideas. Why not have the concept of global solidarity go viral?  We could provide materials, logistics, and a rallying cry. The rest is up to each individual in each community.   In this way we’d minimize overhead to almost zero and maximize our impact.

We decided not to focus our intentions on the power of charity nor the nobility of do-gooders.  By only giving to Haitian-based, Haitian-run organizations, we hoped to shine a light on the power, ingenuity, and resilience of the Haitian people. The Haitian people are not helpless; they are in crisis. Friends in crisis need support, not pity.  We wanted to expose more people to the truly heroic work on the ground that Haitians are doing for other Haitians.  As more people knew of the work already being done, the better likelihood that direct support could reach local activists.

The Sparrow Project immediately swung into action, enlisting the support of a team of folks around the country including Greg Bennick, who had visited Haiti over the past year and created an organization called 100 for Haiti.    100 for Haiti aims to raise $100,000 for a free clinic in Port-au-Prince led by Dr. Jacque Denis. In the interest of collaboration we joined forces by making a call out to our shared networks, asking people to throw fundraisers nationwide and internationally that would support both organizations. “100 Shows for Haiti” was born.

At first we were unsure about how many people would respond.  Most likely, we thought we were being presumptuous at best by calling our effort 100 Shows for Haiti when we had zero shows on the calendar.  Armed with a helping of hubris and plenty hope, we put the call out to our various networks, through Tumblr, Facebook, Twitter, email, conference calls, and the like.  Slowly, people began to commit: a bakery open house in Utah, a dance performance in California, a hardcore show in South Korea.  As momentum built, the calendar filled up. In a few weeks scores of individuals on four continents staged dozens of events, and fundraisers. Events earned as much as $5,000 and as little as $12.  All of these interactions were important opportunities to raise consciousness, build community, and support Haiti.  All in all we raised $17,500.00 in a few weeks, and more events are on the calendar.

Motivated by our immediate success, others are staging events in April, May, June, on and on. What started as an idea a few friends bounced around in an email chain has blossomed into a grassroots, decentralized, international solidarity movement.  We may have put out the initial call but our communities answered  and they answered in ways we never could have imagined.

We hope others will apply this model of grassroots response to other needs all around the world. The emergence of the network as a global tool for change means all of our voices are amplified.  Let’s use that new platform to exercise our collective ability to make great change.  Visit www.100showsforhaiti.com 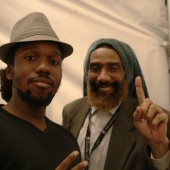 Moe Mitchell is a lobbyist and community organizer with the New York Civic Engagement Table.  When Moe is not at his day job, he expresses his political action through song as the front man for the New York Hardcore band Cipher.  Moe is a tireless social justice activist, a vegan, a poet, and a unbridled voice for the voiceless.