A Look at the Unapologetic Greed of the Financial Sector by Stephanie Basile:

After causing the largest economic collapse in recent memory and taking our taxpayer dollars to help themselves (but no one else) weather the storm, the financial institutions have somehow decided that the financial laws in this country are too strict! Two recent news stories in the New York Times illuminate just how incredibly greedy and unapologetic the people running these institutions are, and just how unwilling the federal government is to challenge this unmitigated greed.

It’s important that we, as activists, are aware of the aggressive and often behind-the-scenes lobbying that the industry does so that we can challenge and offer an alternative voice to the destructive behavior of the financial institutions.

First, the federal government has apparently decided that the financial institutions can be trusted to police themselves! A July 7th story details how the government adopted new guidelines which allow corporations to report their own crimes to the government. They can then negotiate a deal in order to delay or altogether avoid criminal prosecution.

In one example, the Department of Housing and Urban Development (HUD) began an investigation into Beazer Homes, one of the nation’s 10 largest home builders. They found that Beazer took part in such fraudulent activities as offering a lower mortgage rate if buyers paid an extra fee, but then not giving them the lower rate, and enticing homeowners by offering down payment assistance, but not disclosing that it then raised the price of the house by the same amount. After learning of the HUD investigation, Beazer paid a law firm to conduct its own investigation. The company ended up entering into an agreement with the government in which it would pay consumers and the government $55 million in exchange for the HUD dropping its investigation, thus avoiding criminal charges.

Eerily, this brings us one step closer to the ideal corporatist state, in which the lines between corporate power and government power are not just blurry but nonexistent. With these new guidelines, now we don’t just have a government that weakly enforces the law, but instead actually allows corporations to police themselves and pay their way out of criminal prosecution.

While the bill don’t substantially change the unwieldy amount of power already enjoyed by the financial institutions, these pesky new rules are offensive enough that Bartlett and others are lobbying hard to have at least two dozen of them repealed. Among the offensive rules: executive compensation disclosure, in which companies must disclose CEO pay and the ratio of CEO pay to median pay of regular employees. There’s nothing about actually limiting the absurd amount of money CEOs make, just filling the rest of us in on the enormous gap between CEO and employee pay. Another rule: improved credit rating guidelines, in which credit rating agencies must follow tighter accounting guidelines when issuing credit ratings. This measure addresses the problem in which credit rating agencies often mislead investors by releasing overly positive credit ratings.

The powers that be do not like these rules, and they’ve gone into hyper-defense mode. The Times reports that Wall Street spent $52 million in lobbying in the first three months of 2011, up 10% from the previous quarter.

Barlett estimates that the new rules will cost the financial industry $14 billion. Even in the world of cutthroat lobbyists and shrewd businesspeople, Bartlett is known for being particularly aggressive. The Times article quotes him as saying, “I wish I could look the other way. I’ve got 14 billion reasons to be aggressive.”

Nowhere in Bartlett’s “14 billion reasons” is the human cost caused to working families all around the country thanks to the reckless corporate greed of his clients. But then again, in the corporatist state, in which government’s sole purpose is to ensure unlimited power and profits for corporations, pesky things like people’s livelihoods just don’t factor into the equation.

Stephanie Basile is a union organizer who lives in Brooklyn. 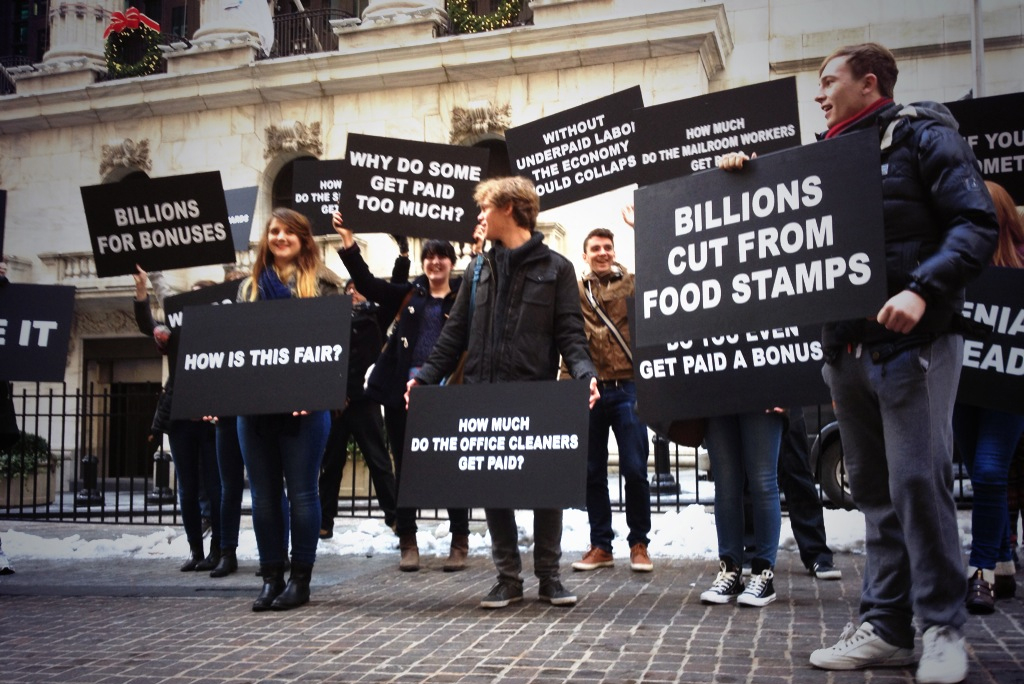 We Will Not Be Silent: Activists and Creatives Will Carry Over One Hundred Messages to New York’s Financial District