From Unity Productions comes a powerful testimonial of the 1.8 million Muslim Americans who are as “every-day” as the rest of us. All cliches aside, they’re our doctors, our police, our teachers, and our first responders. To paint this diverse constituency of millions with a broad brush of prejudice because of the actions of a dozen or so zealots, is not only to do so ignorantly, but also does our democracy as a whole a great disservice

Despite all the measures this country has taken to further freedoms of expression we continue to live in a time of religious intolerance. Though some people’s anger is not completely misplaced, especially in cases where selective applications of religion further sexism, racism, homophobia, speciesism and other actions that directly infringe upon the rights of others, these legitimate grievances should never justify blindly ignorant or hateful actions. Through respectful discourse we should always challenge repressive elements of any social group, and its even ok if people feel offended while they sort things out, but when people cherry-pick negative attributes from a specific religion and then proceed to scapegoat that religion as a predicate for all the world’s problems we begin to traverse down a slippery slope of bigotry and xenophobia that can only end in disaster. Words do have power, especially in timultuous times. One need not look further then the recent attacks in Norway to see the vulgar fruits of seeds planted by hate-mongering bloggers and far-right pundits.

We live in a media-driven culture with an increasingly homogenized narrative. One that habitually trumps sensational lead-lines while passing on surrounding factual foundations because they are less inflammatory or take too long to explain in a 30 second segment. This habit has created a Hollywood-like news cycle infatuated with explosions, scandal, and falls from grace. In this cycle we almost only hear about Islam when it is conflated with terrorism, explosions, conflict, or the repressive elements of a minority’s interpretation of Sharia. Perhaps explaining these conflations is contributing to this cycle of xenophobia as well? 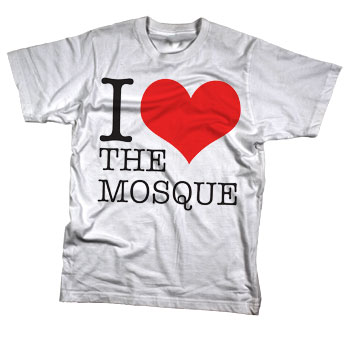 < The Sparrow Project has printed these benefit t-shirts in an attempt to combat Islamophobia.  Proceeds raised from the sale of these shirts will benefit victims of hate crimes.

Less newsworthy, but far more important facts remain under-reported. Xenophobia is running rampant across America and around the world. Racist evangelical conservatives who separate “Allah” from the “God” of the Christian New Testament, disregard the fact that Jesus spoke Aramaic (a language which shares many words with Arabic including “Allah,” as the word for God) and are ignorant of the glaring fact that all of the Judeo-Christian-Islamic faiths worship the same single deity. The term “Islamist” is a term fabricated by right-leaning pundits and bloggers like Glen Beck, Michael Savage and Pamela Gellar, who attempt conflate non-violent Muslims with fascists. Moreover, Jihad means to “strive” or “struggle,” and this term can include everything from one’s personal struggle with alcoholism to a wider social struggle against oppression from a dictator or governing body, the true definition of Jihad is completely divergent from the contemporary adaptation of the word repeatedly used by the mainstream western media. Despite popular western belief, most fundamentalist Muslims do not endorse violence as part of their Jihad. Moreover, most Muslims are not fundamentalists.

However, these less sensational facts don’t support the right-leaning media’s hysterical narrative that at times could appear to exist for no other purpose then to perpetuate a climate of fear of Muslims and to further justify preemptive US military actions in Islamic countries. When the habitual focus of media outlets on both the left and right leave little space for factual dialogue surrounding Islam, its merits, its practitioners, and its tremendous beauty then the onus is on us to create our own inventive grassroots responses to Islamophobia and racism. The Sparrow Project applauds Unity Productions for developing this hard-hitting video short where vulgar soundbites from Michael Savage and similar Islamophobes are juxtaposed against the dominant message of beauty, peace, love, and solidarity.