I’ve been pondering a lot about Martin Luther King, lately; more than usual. Every day, down at Liberty Plaza, I can’t help but think that, had he not been murdered, he would be with us. This was especially salient on Tuesday night, October 18, when I did the People’s Mic with Jesse Jackson. Whatever one thinks of Rev. Jackson’s politics, the man was an associate of the late, great Dr. King. The image of a young Jackson, standing to the right of Dr. King, on that fateful Memphis balcony, is emblazoned on the collective conscious of all who revere justice. 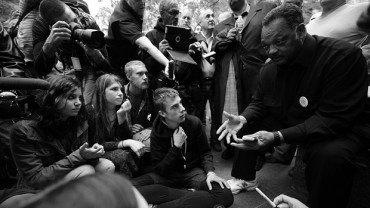 I’ve long been awash in indignation at the co-opting of King’s legacy. Much as the capitalist war-makers have done with other historical figures who devoted themselves to peace and justice, Dr. King has been hijacked and bowdlerized; molded into a neat little figure who fits nicely into Americana.  The egregiousness of this was never clearer or more infuriating than in the recent dedication of the National Memorial to this great person.  Here were Republicans and Democrats (as if there is a difference), marionettes of Wall Street and the Military/Prison Industrial Complex, sanctimoniously celebrating a man whom they would incarcerate, were he still alive. They wish to portray King, selectively, as a Civil Rights leader, and nothing else. They ignore the fact that, for the last three years of his short life, King identified himself as a “Democratic Socialist.” This is the man who characterized capitalism as economic violence and exhorted us to ask, “’Why are there forty million poor people [He would be horrified by today’s total] in America?’” And when you begin to ask that question, you are raising questions about the economic system, about a broader distribution of wealth. When you ask that question, you begin to question the capitalistic economy.”
♦ 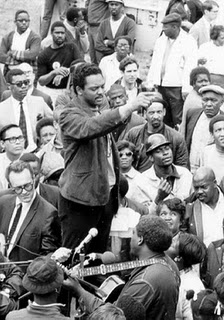 » [related content] Jesse Jackson speaks about OWS & the 1968 Poor Peoples March organized by he and Dr. King on Countdown w/ Keith Olbermann «
♦
Barack Obama spews platitudes of reverence to King, yet enacts policies that would have the latter in fits of apoplexy. This president has received more money for his re-election campaign from Wall Street than any other candidate, in history, and the election is still more than a year away.
♦
This president has deported more than one million people, since taking office, in January, 2009.
♦
This president has expanded the murder machine of war, so that the US is killing innocent people, en masse, in Iraq; Afghanistan; Pakistan; Yemen; Libya, et al. The sabers of iniquity are rattling against Iran, now. Wall Street’s lackey must ensure that everyone join the IMF.
♦
This president has abrogated further the Constitution, vis a vis the First Amendment rights of the nation’s citizenry.
♦
This president has aided and abetted the capitalist class’s assault on labor. While he stole millions from the unions, promising to enact EFCA, he has appointed Goldman alumna to his cabinet. His big mouth was conspicuously silent, when Wisconsin begged for support, earlier this year.

Let us remember that Dr. King, after being harassed for years by the very government which now seeks to siphon off of his legacy by dedicating a memorial to a fraction of the person, was murdered just hours after addressing striking sanitation workers, in Memphis.

So, as I stand/sit/march/scream at Liberty Plaza, I cannot help but think that, if indeed there is another plain of existence to which we go, after our corpora expire, Dr. King is smiling down in solidarity on us, at Liberty Plaza, and shaking his head, in shame, at the Wall Street-Washington cabal that tries to usurp his great legacy.

Arthur Smilios is an unapologetic anti-capitalist, musician rabble rouser.   Arthur was the co-founder of the seminal New York punk band the Gorilla Biscuits. Since his days of performing “Cats & Dogs” (a song that encouraged thousands to adopt a vegetarian lifestyle)  Arthur has strived to braid his art with his passion for social justice.  The Sparrow Project has invited Arthur to continue to sound off on the issues he holds most dear through their blog on https://sparrowmedia.net .  Arthur’s articles are written exclusively in his own voice, and may not reflect the views of The Sparrow Project.