Occupy Wall Street is a peoples movement that continues to evolve and change shape. As an organic experience it is hard to quantify, even harder to map trends or forecast directions, and almost impossible to draft demands from. If OWS had a primary objective (and some argue that it does) it would be to return a voice back to the “the 99%” and to create a dialogue from which the wounds of income inequality can begin to heal. If you were ask occupiers to answer, specifically, what they think should be done to heal these wounds, you are likely to get different answers from occupiers in different cities, even different answers from within the same encampment, and sometimes even different answers within niche working groups. Occupy’s detractors use these scattershot responses and diffuse narrative to make an argument that OWS is without a cohesive message, but within this seemingly confusing environment is something greater then what our contemporary democracy has been able to offer us …voices.

Those who are tasked with collecting and transcribing the Occupy narrative have a difficult job on their hands. The radically inclusive nature of Occupy’s directly-democratic, horizontal, organizing model champions each individual voice accumulated into the collective. This process allows any individual to block a manifesto, a text, a proposal or a call to action if they take exception to the language of the document. Hence, the process is slow, deliberate, and at times, very frustrating. Lex Rendon, Ryan Hoffman, and the “Call to Action Working Group” of Occupy Wall Street were tasked with the responsibility of penning the Declaration of The Occupation of New York City. This small group of writers began an exchange with each of the working groups within the New York City General Assembly to draft a list of particulars that would assure that each working group’s grievances would find their way into the declaration. The result of this exchange was a letter to the world exclaiming who the occupiers were and why they were reclaiming public space in the name of the 99%. After a week-long volley of clarifying questions and friendly amendments the final draft of The Declaration of the Occupation of New York City was ratified by the New York City General Assembly.

In early October, the right-leaning media had developed a narrative targeting Occupy’s diffuse process, their talking point was “Occupy is a movement without a message.” Anyone who had been to an encampment would know that this was untrue, but a PR war had begun and Occupy’s opposition was trying to marginalize this fledgling movement as message-less. Seeing this unfold in press releases and on our TVs we reached out the Call to Action Working Group with a proposal to print 10,000 copies of the Declaration as a pocket-sized booklet. By October 30th, 2011 we delivered 10,000 free copies of a design-savvy 16 page booklet, accompanied by a curated resources list, to the occupiers at Zuccotti Park but in three days time all 10,000 copies were gone and we realized that in order to meet the massive demand for this document we needed a far larger print run. Our goal would be to expand the document to include newly ratified texts by the NYCGA, further expand the resource list, and to print 100,000 copies, all while assuring that the booklet would be free to everyone and we would not take any GA funding. 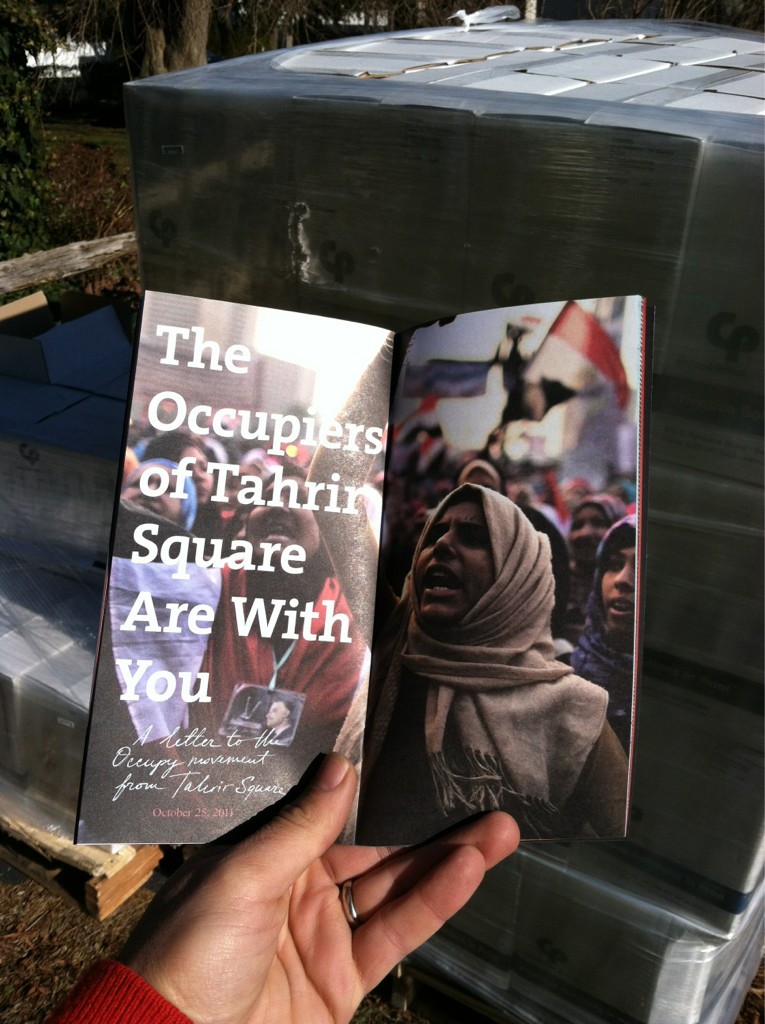 By January 17th 40,000 copies of the second edition had arrived on the East Coast from our printer in Seattle, WA. Without a central hub like the encampment at Zuccotti Park to rely on for distribution we decided to partner with The Housing Works Bookstore to do a launch event in which Occupiers and their allies could come together, discuss, and leave with 1, 10, or 500 booklets to distribute. We invited some of our favorite journalists, occupiers, artists, activists, and community leaders to join us for a panel discussion (timely named “The State of The Occupation Address”) at Housing Works. Dr. Benjamin Chavis, co-founder of Occupy the Dream; Allison Kilkenny, contributor for The Nation, In These Times and co-host of Citizen Radio; Malik Rhasaan, co-founder of Occupy the Hood; Rachel Schragis, designer of the Flow Chart of The Declaration of the Occupation of NYC, Steven Syrek of the Occupy Wall Street People’s Library and Ryan Devereaux reporter for The Guardian by way of Democracy Now! joined Julie Gueraseva and Andy Stepanian of the Sparrow Project to discuss where Occupy has taken us, where it can bring us, and what to expect from Occupy in 2012. With hundreds in attendance the event was a huge success.

Although the panel format went against the grain of most Occupy organizing models the second half of the night which was devoted to group discussion is where some of the greatest energy was expressed. That energy spilled out onto the streets after the event as 20,000 copies of the booklets walked out the doors into the hands of occupiers who pledged to use them to spark conversation with their fellow New Yorkers. Moreover the conversation did not end, it continued in the press in the week the followed with both WNYC’s Brian Lehrer Show & The Young Turks inviting Allison Kilkenny to discuss “The State of the Occupation” on their programs, it continued with a trove of favorable mentions and reviews in outlets ranging from NPR, Eye Magazine, Flavorpill, The Daily News, Time Out NY, Harpers, the New York Times Blog and perhaps our favorite mention yet, in Vanity Fair. The conversation continues as copies of the Declaration are mailed all over the world.

Since January 30th, we have been spending every free moment packing, labeling and shipping copies of the Declaration booklets far and wide. Just last week we received an email from an activist in Switzerland who had received 500 copies letting us know that copies were being left on the desks of regional political leaders and UN representatives. This pamphlet, just like Occupy, started as an idea and it’s with a similar amazement that I daydream about the reach it may have.
In the past month we have fielded requests for 10,000 copies of The Declaration of The Occupation of New York City and we continue to receive more requests every single day. We would love it if you would be willing to donate to our shipping expenses → HERE

The State of the Occupation Address, 7pm This Monday at Housing Works

The People’s Pamphlet: Boutique Publishing for the 99%