Occuprint & OWS: Notes on Art as a Weapon for Non-Violent Insurrection

On the evening of February 16, a group of about 20 artists, designers, muralists, art historians and activists gathered at Interference Archive in Gowanus, Brooklyn, to discuss a selection of posters that have emerged out of the Occupy Wall Street movement. The event was organized by Occuprint—a collaborative project that curates, collects, prints and distributes various posters and graphics by and for the global Occupy movement. The Archive grew out the personal collection of its co-founder, artist Josh MacPhee. This unique space houses an impressive volume of print objects created as part of various social justice movements. One of its goals is to allow this kind of art to exist outside of dominant institutions (that may not be sympathetic to OWS) and instead take it into “the commons”— making it thereby more accessible to a greater range of artists and activists. 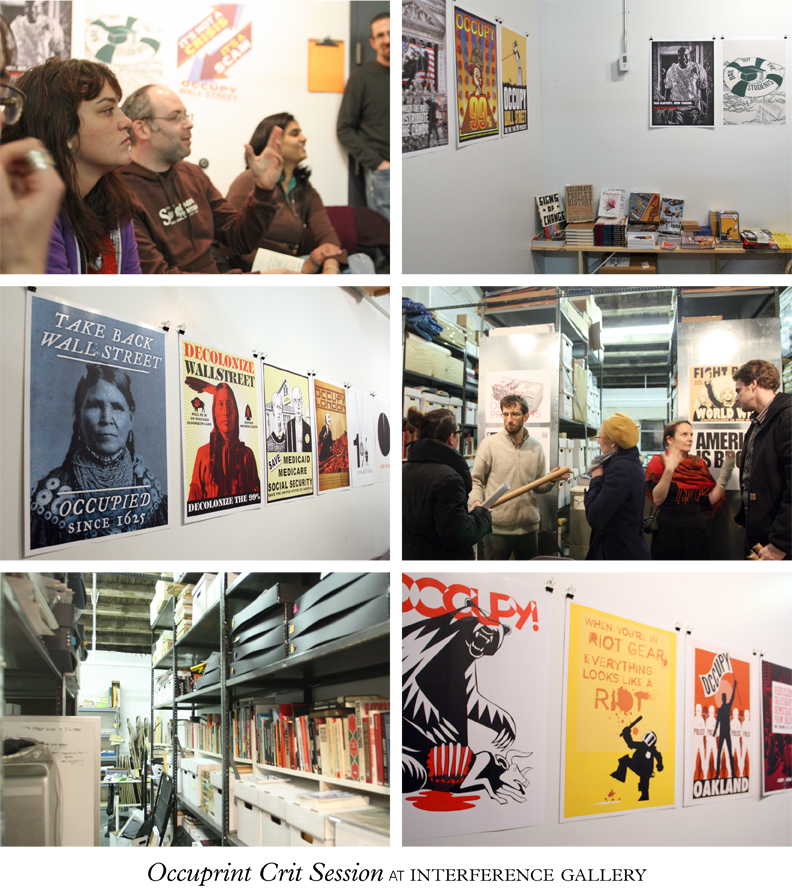 The Occuprint event was an energizing experience. The posters hanging on the walls represented a wide range of ideas, slogans and executions. It was exciting and affecting to see just how many artists and designers had been impacted by the Occupy movement. The passion in their work was evident. During the discussion, the politics and implications of the images in the posters were hashed out and debated; opinions were exchanged on the importance and problems of text, slogans and general aesthetics. Ultimately, the discussion transcended its original original aim of reviewing the posters, and progressed into a wonderfully inspiring brainstorm on how Occupy art could become as impactful and unforgettable as possible. 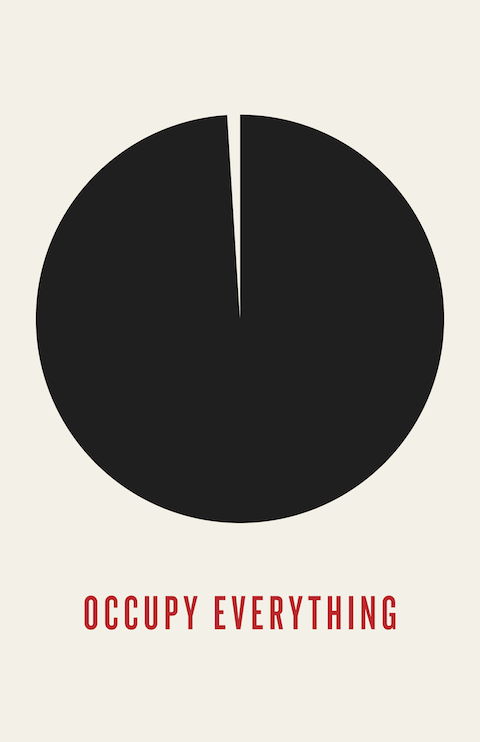 The posters reviewed during the Occuprint event elicited a variety of reactions and contrasting opinions, which made for a dynamic discussion. One example of this was the “Occupy Everything” poster.  Some saw tremendous power in its blankness and argued that the message of the movement was effectively crystalized in the simple graphic. Others noted that the poster’s starkness made it lack emotional resonance, and that it was unclear who the protagonist was. 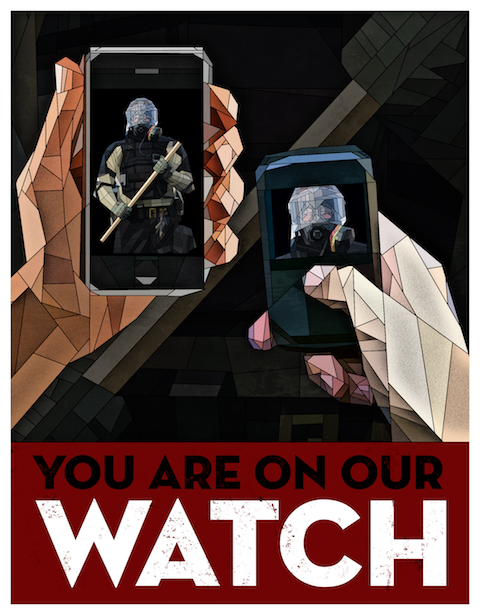 A poster with the slogan “You Are On Our Watch” hit a nerve. Unwarranted police brutality and attacks on peaceful OWS protesters during the past 6 months have uncovered the ugly reality of a police state. The shout “The whole world is watching!” had become a ubiquitous presence on videos of police assaulting innocent people. The poster reminded protestors of the power of their recording devices. While everyone agreed that the message was essential, some disliked the cubist style of the poster and wondered why the images of riot police were not made more realistic. Others were unclear about the ultimate destination of the poster and where it would be most effective: amongst protestors, or on the wall of a police precinct. 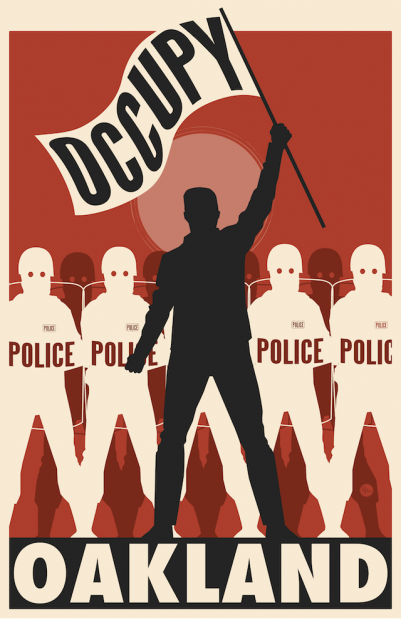 The poster for Occupy Oakland has in many ways become synonymous with the Occupy movement. The image of the protestor waving an Occupy flag, while facing down a riot gear army, evoked feelings of courage and triumph. However, some at the event disliked that protestors were (inaccurately) represented by a single figure; and that the enemy was defined solely by police, boiling the movement down to an “Us against Them” sentiment. 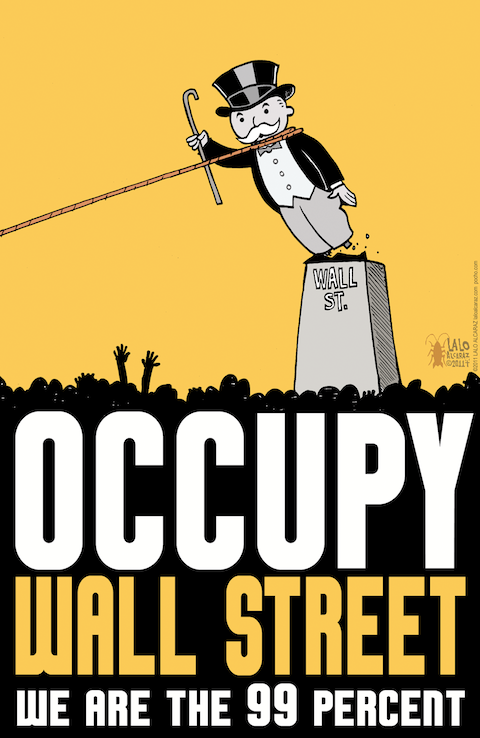 The Monopoly Tower poster was singled out for its creative execution. The object of the beloved board game (also a popular event at McDonalds—a massive & corrupt corporation) is to accumulate the most money; inarguably, the game taught children the concept of wealth and big business. With this in mind, the Monopoly Man becomes a potent symbol of universal greed, as effectively shown on the poster.  To view the entire collection of over 250 posters, please visit http://occuprint.org/Posters

Being originally from Russia, I see parallels between the Occupy Wall Street movement and Perestroika—a period of reform in the former Soviet Union in the mid to late 80’s, initiated by then-head-of-state Mikhail Gorbachev. One of the movement’s main policies—Glasnost— was designed to usher in a new era of greater freedom of information and governmental transparency. These government-intiated policies (imagine if OWS was an initiative of the US government…) ultimately took on a life of their own, leading to the collapse of the Soviet Union and an end to the Cold War. In reflecting on all that movement accomplished, it is impossible to ignore the artwork that emerged during that time. In hindsight, it is clear that it had a huge impact on the mind set of the population. “Artists had rediscovered the power of their weapon, and crowds of people would gather in front of their works.” (from “The Russian Poster”, published by the Russian State Library) What also made the political art of that era particularly interesting was that, contrary to prior Russian art like Constructivism and Socialist Realism, it was beautifully non-conformist and free from the constraints of one unifying aesthetic. Here are a few unique examples: 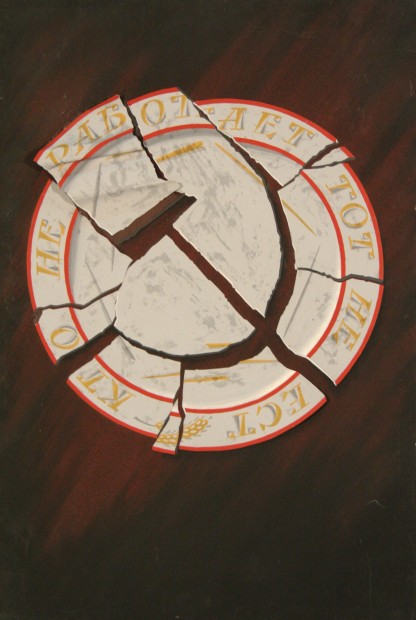 The writing on the plate reads, “The one who doesn’t work, doesn’t eat”– a popular Communist slogan. The shattered plate, its fractures are the hammer and sickle symbol, is a powerful metaphor for the crumbling Soviet regime. 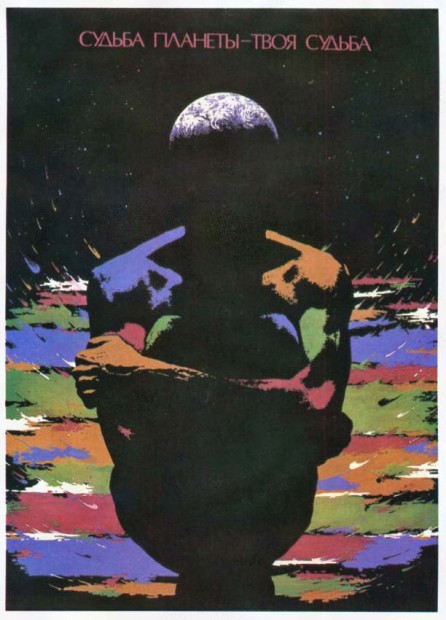 The movement reinergized the consciousness of the country in many ways, including bringing about a new environmental awareness. “The fate of the planet—is your fate.” 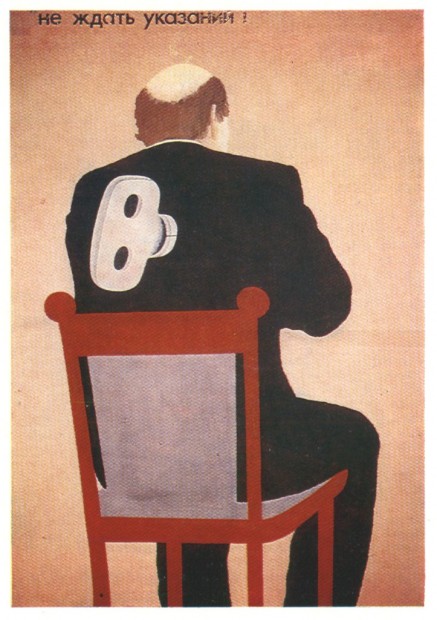 “Don’t wait for orders!” implores this poster, intended to encourage autonomy and initiative amongst the people. 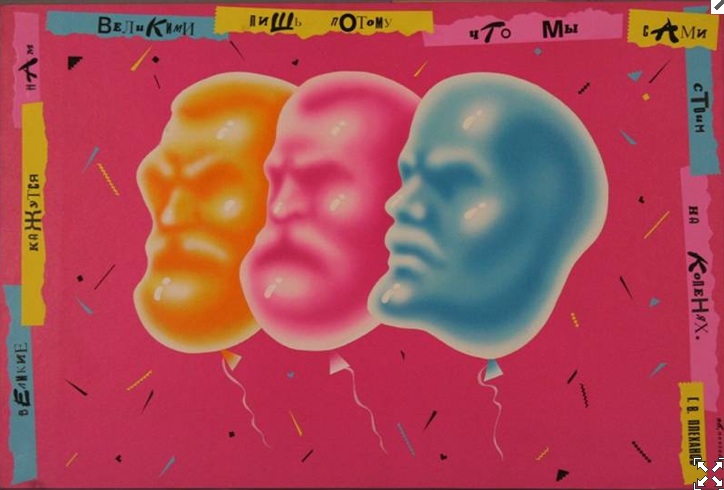 The artist humorously yet poignantly depicted the great men of Communist ideology-Marx, Engels and Lenin as inflated with ideals of little practical value. The words “The great are only great because we are on our knees. Let us rise!” surround the image— the motto of the newspaper “Les Révolutions de Paris,” a paper which appeared from July 12, 1789 to February 28, 1794.

The radical changes born out of Perestroika once seemed unfathomable, almost fantastical. And yet they occurred, largely thanks to the persistent, unified action of the people. So what kind of changes and improvements in the United States right now seem so radical as to feel impossible?.. The dismantling of the military-industrial complex?.. And end to factory farming?.. Quality education and healthcare made accessible to every child?.. If they feel impossible, then they are worth striving for.

Towards the end of the Occuprint discussion, Rodrigo Dorfman—a Chilean filmmaker who was in attendance— shared a few stories from his youth. He described how in the mid-80’s, young activists would defy the nightly curfew imposed by the Chilean dictatorship, and put up giant posters under the cover of darkness. “WE ARE NOT AFRAID” and “JUSTICE FOR THE DISAPPEARED” were some of the slogans on the posters, painted in huge block letters. Rodrigo recalled how he went out to film one of these actions with the full knowledge that he could get shot on the spot. This was the kind of risk activists faced in order to bring these posters to the public, to inspire and motivate people, to give them hope; and to stand up to the tyranny of the authorities.

Art is indeed a weapon, and an especially powerful one in the midst of a peaceful movement.

In 2012 Occuprint will be producing thousands of posters and printed materials for Occupations around the country.  If you would like to support Occuprint’s efforts you can contribute to their Kickstarter fundraising campaign → HERE