On July 11, 2012 the New York Post ran a 37 paragraph story on a tenuous connection between DNA found on a sequence of chain left behind at a direct action and DNA found at a 2004 crime scene where a Juilliard student was found murdered. Side-stepping both logic and decency toward the victim’s family the Post disregarded the fact that as many as 8,000 New Yorkers came near or in contact with the chain as it affixed an MTA emergency door open (part of a fee-strike labor action in solidarity with NYC transit workers) and immediately planted the story on the tabloid’s front page along with a sensational headline that read “OWS Murder Link”. In the 48 hours after their rush, a flood of speculative stories were published, undoubtably opening up old wounds for the family and loved ones of the murder victim. Within 2 days of the story breaking an anonymous official with the NYPD stepped forward to say that the DNA found at both the direct action and the 2004 crime scene were in fact from the skin cells of an NYPD lab official who came into contact with evidence at both locations. Instead of posting a lengthy retraction and public apology for misleading the city, the Post ran an article claiming that the DNA evidence had been “contaminated”. A similar article appeared in the Daily News under the headline “Lab Rats” (alluding to the lab official’s breach of the NYPD’s “blue wall of science” by coming clean with the truth). 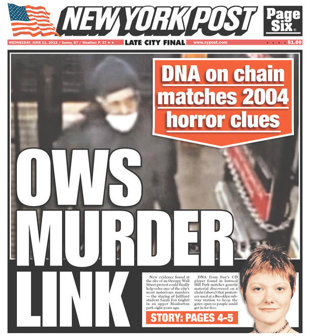 Larry Celona and Jamie Schram were the reporters at the New York Post most directly responsible for breaking this “story,” both work a police beat and both regularly liaise with the NYPD. This incident and the subsequent lack of a proper redaction and apology go beyond Larry and Jamie and speak to a pattern at the Post of vilifying and demonizing groups that speak truth to power in New York City, specifically those who have challenged the NYPD (like Anti Stop-and-Frisk campaigns & Occupy Wall Street). The Post had attempted for nearly 10 months to try and frame the largely non-violent Occupy movement as anything but, and quickly jumped on this unverified DNA connection to a horrible tragedy as a opportunity to frame that narrative. The fact that Larry and Jamie have so much contact with the NYPD further muddies the journalistic waters as this originated with the NYPD and was later handed to Celona & Schram.

Despite some clarifications (certainly not a clarification on the tabloid’s front page) one has to wonder what activists can do to hold institutions like the Post accountable for their misdeeds? We as publicists at the Sparrow Project specialize in being a middle agency between activists and the press. We are only able to provide such agency on account of our contacts at mainstream media outlets. Since our foundation is built upon trust with our contacts, it is almost always counter-intuitive to publish our contacts …except today.

We believe that there is no hope for the New York Post as a media outlet, and we can easily justify burning our bridges with the tabloid in hopes to achieve any element of justice. Listed below is the personal contact information for not only Larry Celona and Jamie Schram.  We share this information with you in hopes to make right an infinite amount of wrongs perpetrated by the Post and we implore of you to use this information in a responsible manner to address your complaints and not to intimidate or threaten those who you communicate with.