[New York, NY] A lawsuit over a provision in the National Defense Authorization Act (NDAA) will be back in federal court at 10am on February 6, 2013, awaiting decision on an injunction prohibiting indefinite detention of civilians without charge or trial. A group of academics, journalists, and activists filed suit last year over § 1021(b)(2) of the NDAA alleging that the provision suspended due process rights and threatened first amendment protections. 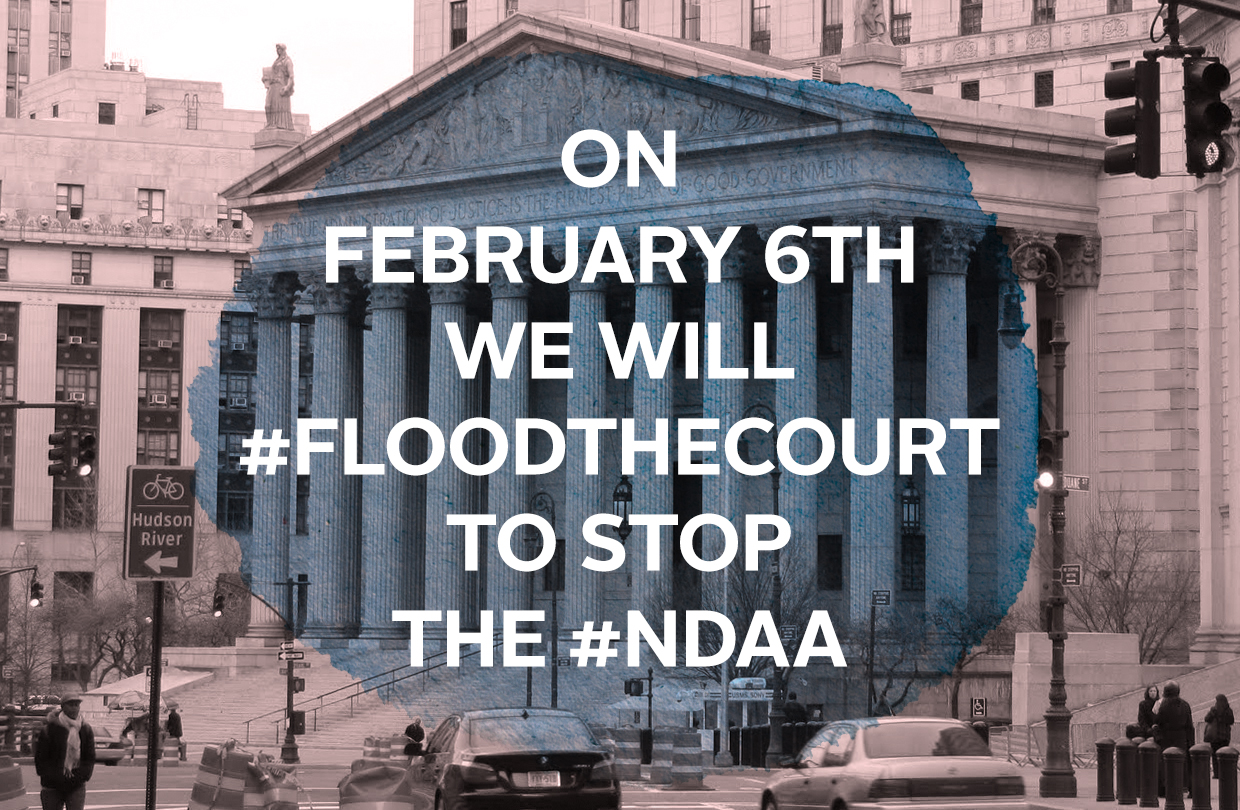 “Not once in any of its submissions in this action or at either the March or August hearings has the Government said, ‘First Amendment activities are not covered and could never be encompassed by § 1021(b)(2). This Court rejects the Government’s suggestion that American citizens can be placed in military detention indefinitely, for acts they could not predict might subject them to detention, and have as their sole remedy a habeas petition…That scenario dispenses with a number of guaranteed rights.”

Despite including a signing statement expressing deep reservations over the “indefinite detention provision” and promising not to use such powers against American citizens, President Obama immediately appealed Judge Forrest’s ruling, and sought an emergency stay on the injunction, claiming “irreparable harm” would be incurred by the US if the government lacked the ability to indefinitely detain civilians under section 1021.

“This is the final battle between the restoration of due process along with our most cherished civil liberties and the imposition of a military state,” said Chris Hedges, “if we lose this battle, will be vulnerable to being seized on American soil by the military, stripped of due process and held in indefinate detention in military facilities, including our off-shore penal colonies. It is up to federal judges now to pull us back form the brink.  Our legal challenge to section 1021(b)(2) of the NDAA is one of the defining moments of our era.”

The suit has been joined by over two dozen organizations and individuals who have filed Amicus Curiae briefs in support of the plaintiff’s claims that § 1021(b)(2) of the NDAA is over-broad and facially unconstitutional.  One such supporting brief, filed by Karen and Ken Korematsu (Children of Fred Korematsu & each Amici in this case), draws a chilling comparison between indefinite detention under the auspices of the war on terror and the internment of Japanese Americans during World War II:

“Korematsu remains on the pages of our legal and political history. As a legal precedent it is now recognized as having very limited application. As historical precedent it stands as a constant caution that in times of war or declared military necessity our institutions must be vigilant in protecting constitutional guarantees. It stands as a caution that in times of distress the shield of military necessity and national security must not be used to protect governmental actions from close scrutiny and accountability. It stands as a caution that in times of international hostility and antagonisms our institutions, legislative, executive and judicial, must be prepared to exercise their authority to protect all citizens from the petty fears and prejudices that are so easily aroused.”

In opposition to the plaintiffs Senators John McCain, Lindsey Graham and Kelly Ayotte have utilized the Amicus process to file a brief in support of the government’s use of § 1021(b)(2) of the NDAA and have taken the unusual step of filing a motion requesting 10 minutes of oral argument time in the February 6th, 2012 proceedings, claiming the need for the Senate body to be represented in court when it comes to indefinite detention.  Plaintiff attorneys are awaiting word on whether the 2nd Circuit will grant this motion.

UPDATE: On Thursday, January 31st, 2012 attorneys for the plaintiffs received notice that McCain, Graham and Ayotte were awarded a 5 minute oral argument at the proceeding. To compensate for this the 2nd circuit also added 5 minutes onto the plaintiff argument (allowing for 20 minutes total).

A bipartisan coalition of groups backing this lawsuit, including Demand Progress, RevolutionTruth, the Bill of Rights Defense Committee and the Tenth Amendment Center, are calling on members and supporters to join the plaintiffs in court. Activists promoting a call to “Flood the Courthouse” have already received over 300 RSVP’s from activists and supporters of the plaintiffs

To obtain video of the press conference or to arrange an interview with any of the plaintiffs or counsel please contact Andy Stepanian at andy@sparrowmedia.net or 631.291.3010.