[WASHINGTON, DC]  Massachusetts Institute of Technology (MIT) PhD candidate Ryan Shapiro filed a lawsuit this morning against the Central Intelligence Agency over the spy agency’s failure to comply with his Freedom of Information Act (FOIA) request for records on recently deceased anti-apartheid activist and South African President, Nelson Mandela. Shapiro wants to know why the CIA viewed Mandela as a threat to American security, and what actions the Agency took to thwart Mandela’s efforts to secure racial justice and democracy in South Africa.

Shapiro, a FOIA specialist, is an historian of the policing of dissent and the political functioning of national security. His pathbreaking FOIA work has already led the FBI to declare his MIT dissertation research a threat to national security. Shapiro also has FOIA requests for records on Mandela in motion with the Federal Bureau of Investigation, the Defense Intelligence Agency, and the National Security Agency. Shapiro is represented by FOIA specialist attorney Jeffrey Light.

Two Key Issues Regarding Today’s Filing Against the CIA:

1) The CIA is widely and credibly believed to have been involved in Mandela’s 1962 arrest that led to his decades-long incarceration. Yet, the Agency has never admitted its role in this affair, and little specific public information exists on the matter. Shapiro’s FOIA efforts will begin to fill this massive hole in public knowledge of U.S. intelligence operations.

2) Despite longstanding public knowledge of U.S. intelligence assistance to apartheid South Africa in general, and in Mandela’s arrest in particular, much of the U.S. and world press has paid distressingly little attention to these issues. Even in the wake of Mandela’s death, these issues, including the fact that Mandela remained on the U.S. terror watch list until 2008, have for the most part remained ignored or discounted. Shapiro’s efforts will bring much-needed attention to these vital topics, as well as to the U.S. intelligence community’s continued outrageous aversion to transparency.

“Though the U.S. intelligence community is long believed to have been involved in Mandela’s arrest, little specific public information exists regarding this involvement. Similarly, though the U.S. intelligence community is long understood to have routinely provided information to the South African regime regarding the anti-apartheid movement, little specific public information exists about these activities either. Further, despite now being universally hailed as a hero and freedom fighter against gross injustice, Mandela was designated a terrorist by the United States government and remained on the U.S. terror watch list until 2008.

In bringing suit against the CIA to compel compliance with my Freedom of Information Act request, I seek access to records that will begin answering the following questions: 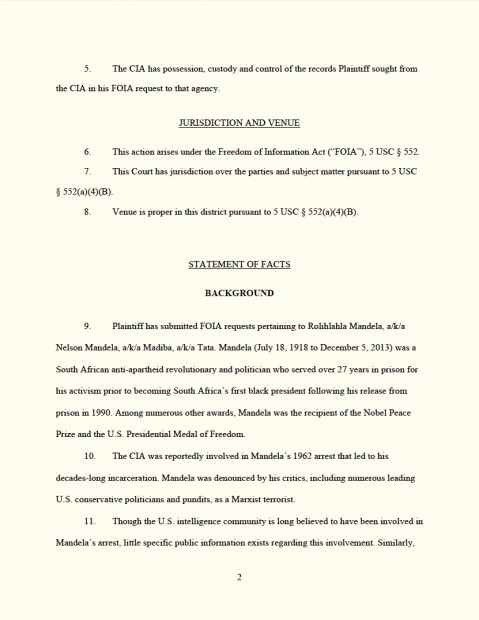 You can read the full text of today’s court filing against the CIA HERE.

To arrange an interview with Ryan Shapiro please email or text Andy Stepanian at andy@sparrowmedia.net or 631.291.3010. You can follow Shapiro on twitter at @_rshapiro