[DALLAS, TX]  The curious case of Barrett Brown —a freelance journalist and satirist, turned political prisoner— has captivated thousands in the lead-up to what many are calling a “show trial” slated to take place in Dallas, TX, later this year.  In an open letter published this morning (and attached below),  Icelandic MP, Birgitta Jonsdottir claims the charges against Brown are part of a larger “unjust war on whistleblowers, journalists, and information activists.”  Brown, who has been incarcerated since September 12, 2012, is facing three separate indictments carrying a sum of 17 federal charges, each related to his work with Project PM (a crowdsourced journalism initiative aimed at shedding light on private contractors in the intelligence industry.)  Brown’s charges, should he be sentenced to them consecutively, have him facing 105 years in Federal prison.

At the core of these charges is an argument that Brown’s alleged conduct of linking to, and editorialized upon, documents leaked by others to an unrelated 3rd party is tantamount to the leaking itself and henceforth constitutes a criminal violation of fraud and abuse. This controversial contention has triggered a groundswell of support from press freedom foundations and activists that see Brown’s case as a canary in the coal mine of permissible internet speech.  From occupying recent monologs in the popular Netfilx political series, House of Cards, to charming readers of his popular column in D Magazine, it feels like everyone is talking about Barrett Brown (and rightfully so).  Whether or not this attention will translate into a successful challenge to the charges against him remains to be seen, but what is undisputed is that in the weeks, months, and possibly years ahead, Barrett Brown needs our solidarity.  You can learn more about how to support Brown HERE as well as donate to his defense fund HERE.

Birgitta Jonsdottir is a member of the Icelandic Parliament and an outspoken advocate for at-risk whistleblowers and journalists.  The following is MP Jonsdottir’s open letter regarding the prosecution and protracted abuse of Barrett Brown since his incarceration.  We encourage others to copy, excerpt and share this content freely and widely…
♦

The Criminalization of Journalism

If Barrett Brown is found guilty we will all be forced to rethink how we use the Internet and share information, knowledge, blog, report, tweet, use facebook and google.

His case has been like a long drawn out fiction since he was arrested in Dallas at gunpoint by a heavily armed raid on his apartment on the 12 of September 2012. He has been kept in prison ever since, charged with 17 counts that include threatening a federal agent, concealing evidence and disseminating stolen information. He faces a maximum sentence of 100 years in custody and has been placed under gag order by specific request of the government.

When I first heard of the bizarre case of Barrett Brown, a journalist for among others Vanity Fair, The Guardian, and Huffington Post, I was shocked to notice that his ordeal was not headline news. His central work at the time was around investigations and research that was focused on the cyber-industrial complex. Barrett was investigating the private intelligence industry with Project PM using leaked e-mails from HBGary and Stratfor. That earned him the attention of the Justice Department. Project PM is a crowd-sourced research project, and a very valuable resource for data on the privatized segment of the invisible Empire.

Barrett was a prominent activist for transparency, he worked as an embedded reporter with Anonymous. At the time of his arrest Barrett Brown was onto something that the governmental Watchmen wanted to be keep below the surface no matter what.

Barrett is obviously being punished for looking into the surveillance state and being vocal about it. The judicial overreach is to the extent that, as stated, he was even imposed a gag order by a federal court in Dallas, and not only him but also his legal team. This gag order prevents them from talking to the media about his unprecedented prosecution for alleged offenses relating to his work exposing online surveillance. Imposed at the request of the US government, the court order, prohibits the defendant and his defense team, as well as prosecutors, from making any statement to all media outlet members.

Indictments for linking set a very dangerous precedent not just for journalists who want to link to hacks/leaks in their reporting, but the Internet as we know it and modern media development where citizen research plays an important role in sifting through raw data. The right to link is at stake, a function that is the backbone of Internet culture of sharing knowledge and information. But there is more, much more.

Reporter’s privilege to protect their sources is at stake, and if it has ever been important to be vigilant in that regard, then that time is now. With new revelations about mass surveillance capacities of the NSA and its sister clandestine institute in the UK by the courageous whistleblower Edward Snowden the world has been forced to face that ongoing violation of our privacy as the norm. It also means that journalists can´t protect their sources, doctors can´t ensure patients confidentiality nor can lawyers guarantee confidentiality towards their clients.

Barrett was digging deep into uncomfortable information about how the US Government has outsourced most of it’s spying to private companies. Big Corporate Brother is watching our every thought, our every emotion and our every action. Every breath we take is being analyzed and scrutinized by algorithms of increased sophistication and there is an intent of an all encompassing surveillance in the name of false security. Knowing this, that probing into my private life is happening does not make me feel any security at all, it is quite the contrary.

Reporter’s privilege and free speech is something most of us hold sacred. The very laptops that Barrett is charged with obstruction for concealing contained journalistic sources and work product, including a book-in-progress. The First Amendment is understood as protecting reporters from revealing confidential information or sources, but there are clear signs that the constitutional values in the USA are being eroded by DoJ investigations into national security leaks. The FBI raid which led to these charges was based on false information, and actually there was no crime to investigate. It was nothing more than an attempt to stifle Barrett’s reporting on the private/public partnership concerning surveillance and inhibit his research.

Despite Aaron Swartz’s suicide, the government is still waging an unjust war on whistleblowers, journalists, and information activists. People are being prosecuted (and also highly over-prosecuted) for political acts or merely because the government doesn’t agree with them. Just why is Barrett being charged when numerous other people, including established reporters, shared the same link?

Evidence is mounting towards the bleak reality that Barrett is being persecuted because of his work exposing the activities of private security and intelligence companies that do the government’s dirty work and spy on the public. If citizens are not allowed to research the growing surveillance state, what will happen in the future to privacy, transparency and not to mention our civil liberties? We cannot allow his case to be ignored, it demands a reflection of brutal honesty on where our democratic rights are heading, the very foundation of democracy is at stake when the most important and valued constitutional rights are being violated in a systematic wave of governmental abuse, not only in the US but around the world. The secret service is out of control and it is revealed more and more each week that this surveillance state is working toward questionable ends.  Nobody wants to live in the United World of Stasi, and this undeniable fact is exactly why we have to show the political prisoners of the information evolution profoundly more support. ‡ 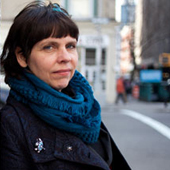 Birgitta Jonsdottir is the chairman of the International Modern Media Institution, a former WikiLeaks volunteer (2009-2010) an activist and currently a member of the Icelandic parliament for the Pirate Party whom she helped co-create. Her Icelandic Modern Media Initiative parliamentary proposal was unanimously accepted in the parliament in 2010, its aim and vision to make Iceland to be a save haven for freedom of information and expression. She is currently working on a similar proposal in relation to online privacy, inspired by the information provided by Snowden. Birgitta was a victim of the US governmental invasion into her privacy in early 2011 when DoJ demanded to have access to her twitter metadata. She lost the court battle despite having access to the best lawyers in this field in the USA from the EFF and ACLU. On February 3, 2014 Birgitta used her role as MP to nominate Chelsea Elizabeth Manning and Edward Snowden as candidates for the Nobel Peace Prize. Birgitta has limited a media availability, interview requests can be made via Andy Stepanian at andy@sparrowmedia.net