MENDOCINO, CA — On Monday, September 15, 2014, in a crass marketing exercise, —shoddily enveloped in deniability— Urban Outfitters made available on their website, a sweatshirt, with a Kent State University insignia, appearing to be tattered and blood spattered.  The launch of this item cut deep with many, triggering painful thoughts of contemporary school shootings, ugly reflections of the current state of police violence in communities, and worse yet, it seemed to relegate the memory of the Kent State University protestors who were brutally murdered by the national guard into a frame of hipster irony.  Pushback was inevitable —a petition was quickly created, media was quick to indict UO on the move, and shortly thereafter the company issued a half-cocked apology.

Perhaps the most disturbing moment in the exchange came on Tuesday September 16, 2014 when Urban Outfitters CEO Richard Hayne refused to speak to Laurel Krause, sister of slain Kent State University student Allison Krause, presumably because he was busy conjuring up this email to UO staff about how the sale was a mistake.

Since Richard Hayne has prioritized courting controversy over reading a letter from a family member of a young woman whose life was stolen by the predicate tragedy, we are posting the complete text of Laurel Krause’s letter here:

“My sister Allison Krause was one of four students killed at Kent State University in May 1970 when United States military personnel opened fire on unarmed students protesting against the Vietnam War. I was 15 at the time and Allison was 19, the age range of many Urban Outfitters customers.

“I was absolutely stunned and appalled to see what appeared to be a blood-splattered Kent State sweatshirt on sale at your online store this week. It brought back the horror of May 4, 1970 and the death of my sister, murdered in a Kent State campus parking lot on that day.

“My family and I were deeply dismayed that no staff member at Urban Outfitters was able to recognize the insensitivity of selling this garment and we question the staffing decisions and product selections of a company meant to be at the forefront of youth culture in America.

“We also feel that your official apology made light of the gravity of the incident. Urban Outfitters failed to recognize their responsibility in this matter. You put profit above people when you sought to make money with this horribly offensive garment and online marketing stunt. 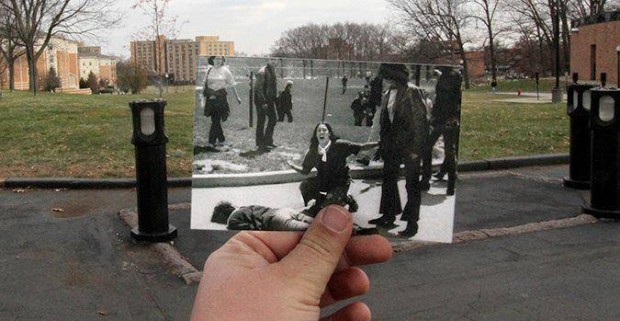 “We ask Urban Outfitters to make every effort to rectify our injury by acknowledging the true history and significance of the Kent State massacre, which lead to the largest campus protest and strike in US history. Urban Outfitters should turn this disturbing event into an opportunity to educate their customers and greater community about the Kent State Massacre and the lessons that can be learned from it.

“The Kent State Truth Tribunal primarily focuses on education and spreading Kent State truth and justice. We strongly encourage Urban Outfitters to take a meaningful step in the right direction by returning our phone calls so that we may work together to rectify this insult and injury. Many Americans stand by us in our call for Urban Outfitters’ accountability.

To arrange an interview with Laurel Krauss please contact Andy Stepanian via email at andy@sparrowmedia.net or by phone at 631.291.3010.