“I want someone to sit me down and say, what the fuck was up with that?,” says Tim McIlrath, front man to Rise Against, a pop-punk outfit from Chicago. In an interview off the set of the music video shoot for “Re-Education (Through Labor)” the single off their most recent album “Appeal to Reason” (DGC/Interscope) McIlrath states that “Americans are coddled with images of non-violence,” and that, “we have a war raging in Iraq where hundreds of thousands of people are dying,” and that “this video is about not coddling Americans and letting them know that this is a reality, this is a potential reality, treat people fair because these are realities we can be looking at in our future…”

These “realities” to which he refers to are depicted in a music video montage of typical music scenesters on an atypical self-styled campaign of destruction. (Quite literally the video shows your cookie cutter hot topic set running around with and eventually detonating improvised explosive devices.)

Rise Against, who in recent years have developed a groundswell following have made a conscious effort not to fall into lockstep with the process of corporate grooming & imaging that most of pop-punk acts succumb to. Simply put, many of the record companies are afraid of their artists getting overtly political, especially when it involves issues that make us all feel uncomfortable. Generally, the record company opinion is to do everything not to alienate a potential buyer, because they buy your merch, your albums, go to your shows, etc. The next part goes like this… “don’t get too political, because when you do the people who don’t share your opinion will feel alienated and henceforth you will narrow your audience, you will sell less stuff, and since all we care about is money we don’t want that.” I applaud Rise Against for trying to keep the grooming to a minimum while watching their sophomore album “The Sufferer & The Witness” go gold with certification by the RIAA and while “Appeal to Reason” is creeping towards gold, debuting at #3 on the billboard charts selling 65,000 copies in its first week alone. This is an accomplishment in itself considering the internet has made it nearly impossible for an indie artist to go gold, let alone a hardcore band, and it’s even harder for a hardcore band with a political platform.  But enough saccharine…

When I first saw the video, I think I regurgitated the exact phrase McIlrath hoped to evoke. Literally I think I said something like, “What? – How? – What? You’ve got to be fucking kidding me?” or a derivative of such. So many things came to mind, too many to list but if I had to sum them up I was thinking…

I took this question and the clip to a friend of mine, a videographer who makes campaigning tapes for unions in NYC. He laughed when he saw it and said that, “corporations love that teen angst stuff… that shit appeals to kids. They don’t expect it to go anywhere.” I guess that’s how Rise Against’s handlers, MTV, Music Choice, Fuse, and whoever else’s hand this touched saw it as well, teen angst and nothing more. To chalk it up to “teen angst and nothing more” is a sad commentary considering the state of the world today: two wars waged without public support with little to no outdate, the rate of species extinction increasing 1000-fold in the last 100 years, genocides in Gaza & Darfur (and probably a dozen similar events go under-reported,) billions of animals killed annually for human excess or vanity, the continued objectification of womyn in pop culture, and the commoditization of everything living from children in sweatshops to forests slated for sale. There are a lot of real issues to be upset about.

I think the reality of the situation falls somewhere in between, I think people are upset, and this type of content is becoming more appealing to folks as the proverbial chickens are coming home to roost. However if this video posed a true threat would the networks still agree to play it?

For those of you who know my background you are aware that I spent years in prison for being charged as an alleged “extremist activist” so perhaps I look at this topic through a biased lens. However, I do question whether or not it is responsible for bands to produce videos such as this. Sadly when one becomes a celebrity in our spectacular culture they become a spectacle, a larger than life figure, sometimes even a role model, and with the fame they inherit a heavy burden of responsibility.

The real question here is will kids feel the hype of this video and go out and follow suit?, or will they just feel the hype and shake their fists? Anyone can realize that when you employ mass destruction as a direct action tactic the chances of hurting someone are inevitable. It is my opinion that there is no moral argument for violence against people or animals, and by the tenor of his interview McIlrath seems to echo that opinion; so this is where the situation gets murky. Rise Against must consider that as their audience widens with their success the gamut of their listeners/fans is going to span all walks of life, all temperaments, various types of people, some more rational than others, and some who feel incredibly disparaged. Some listeners may be moved to act, and if they are moved to act should they be moved in a better, more sustainable direction than the imagery reflects this recent video? It is clear that there is an abundance of work that needs to be done, and we are going to need to cultivate a culture of life-long activists to address these seemingly endless problems. Wrecking shit is not always pragmatic. Not if it allows systems of oppression to stage which-hunt style grand juries, or raid homes, or scare off future activists in response to one night of wreckage. We need to plan for the long haul, and sometimes that means working on projects a lot less glamorous. Making copies, cooking food for hungry people in your community, cleaning up an old factory to make a D.I.Y. social center, this things don’t exactly meet the criteria of sexy, visually inspiring footage to make a music video from, but this is the backbone of the revolution, not an aesthetic of tattoos, angular haircuts, and burning skylines.

I don’t say this to undercut the effectiveness of direct action, but rather to say that we should be constantly critiquing (in a positive, constructive manner) ourselves, our movements, and our social scenes. In the case of this video I would have preferred to see solid examples of activism, realistic and less violent implementations of direct actions, and a more constructive approach to social change depicted in the video treatment, but alas maybe that would be too boring and the video would miss rotation…

I can only assume that as intelligent people as well as successful artists Rise Against are probably discussing the same things. I have to say I appreciated the narrative of their follow up video “An Audience of One” so much more, as it touched on so many current events, deforestation, gay marriage, war, urban sprawl, and a former president who essentially behaved like a bratty child who wanted to prove something to his father. Their most recent video for “Hero of War” was both bold, brilliant, and needed in it’s handling of the reality of war, and the realities that people on both sides of the Iraq conflict experience. 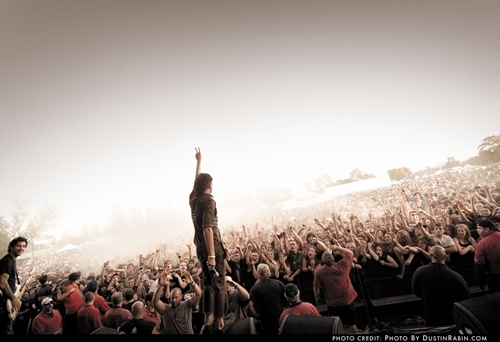 In place of railing against Rise Against and their video for “Re-Education (through labor)” we thought it would be more constructive to invite them on here for a dialog, lets say less of an interview and more of a dialectic. Stay tuned to SparrowMedia.net for follow-ups to this. I thought it best close this out with a few links to real projects you can get involved with in your area. Take time to whittle out a long lasting sustainable niche for yourself within our larger movement, find something inside that means the world to you and take action for it. If not you, who? If not now, when?

Students For a Democratic Society – http://www.studentsforademocraticsociety.org/

The Do Something Campaign – http://www.dosomething.org/

To Write Love on Her Arms Founder, Jamie Tworkowski, Speaks About Hope, Non-Profits, & The Power of a Story