The Enemization of Everything or an American Story of Empathy & Healing?

As president Barack Obama was sworn in for a second term and announces his cabinet selections The Indypendent has published a special issue titled “The Shadow Term” in which they have selected their own creative roster for cabinet appointments.

AN AMERICAN STORY OF EMPATHY & HEALING

In the weeks between my appointment and when I entered this office I had the privilege of spending several days alongside former Secretary Janet Napolitano. I found Secretary Napolitano’s leadership to be exemplary as applied to the terms defining her position as DHS secretary. These terms, framed 11 days after the 9/11 terrorist attacks, provide a foundation for what it means to direct our Department of Homeland Security. However, I regretfully, and respectfully, submit to you today, that these terms upon which we apply the responsibility of securing of our homeland are flawed. I intend to spend my term as secretary redefining these terms, and eventually redefining the position of secretary to the Department of Homeland Security.

With no disrespect intended to Secretary Napolitano, I will share with you a conversation she and I had regarding these aforementioned terms.

Over the past nine-and-a-half years, this department has grown exponentially to employ more than 240,000 Americans around a principle that in order to innoculate our population against an attack by an invisible enemy we must first “enemize” everything, treating each and every living thing (and at times even non-living electronic entities) as if she, he, they or it were plotting the next attack on our homeland. The private sector has also seen unfettered growth around its ability to monetize “the enemization of everything,” from developing security technologies in response to unforeseen “enemies” to using the specter of terrorism to draft and fast-track model legislation that serves business interests.

While taking a position that everything is an “enemy” can make it harder for an “enemy” to execute his or her plans, it also creates an ugly, fear-driven environment that sows seeds of distrust, from misplaced suspicions about your neighbor’s religious or political affiliations to fears of crowds or airplanes. Moreover, this “enemization of everything” has been observed to have a profound psychological impact on some individuals. For some, being told over and over by peers or media that they are “an enemy” makes them want to react by becoming that enemy. After surviving a decade rife with violent outbursts and mass shootings, we as a nation cannot afford to ignore the psychological impacts of our post-9/11 terror culture and security-industrial complex on the moral fabric of our communities.

I intend to use my directorship here at the Department of Homeland Security to transform this agency into a restorative agency. To do so we must first undo this prerequisite “enemization” model. We then need to reach an understanding that terrorism, whether political or apolitical like a shooting in a movie theater, almost always has an origin. These origins should be treated as wounds that we as an agency have a responsibility to heal. If we as an agency can isolate these origins on various cultural, systematic or personal levels, we can begin to heal the wounds that jeopardize our security.

From deeply personal individual battles with cancer to the global war on terror, human responses to these acute onslaughts are almost always reactionary and seldom preventative.

Amid the immediacy of our tragedies we rarely question what brought us to those malignant moments; instead we desperately reach for quick fixes — surgery, chemotherapy, torture, drones, carpet-bombing. In the global war on terror, preventative medicine is often practiced as pre-emptive military action, rendition, entrapment, torture and sanctions. These means never challenge the cultural roots of the problem and often serve as a tool for terrorist recruitment.

Like flourishing bacterial cultures in a petri dish, terrorism is a symptomatic cultural reflex that can be easily seen growing out of its own hospitable environments. Oppression, poverty, inadequate education, constant subjugation to the accepted institutionalized abuse of animals and a lack of individual autonomy are the stagnant waters in which this global disease of terrorism takes root and grows. As secretary, I intend to use this agency to analyze, isolate and ultimately treat the prerequisite events that give way to future acts of violence.

To make this agency a restorative agency, not only must we speak in a restorative manner, but our actions and our policies must also promote restoration.

Many of my detractors have speculated about my proposed policy changes, some have gone as far as to call them “treasonous.” I will reserve any comments regarding my policy plans for a later date, but can assure those detractors that I fully intend to re-write their script of “enemization” to an American story of empathy and healing. 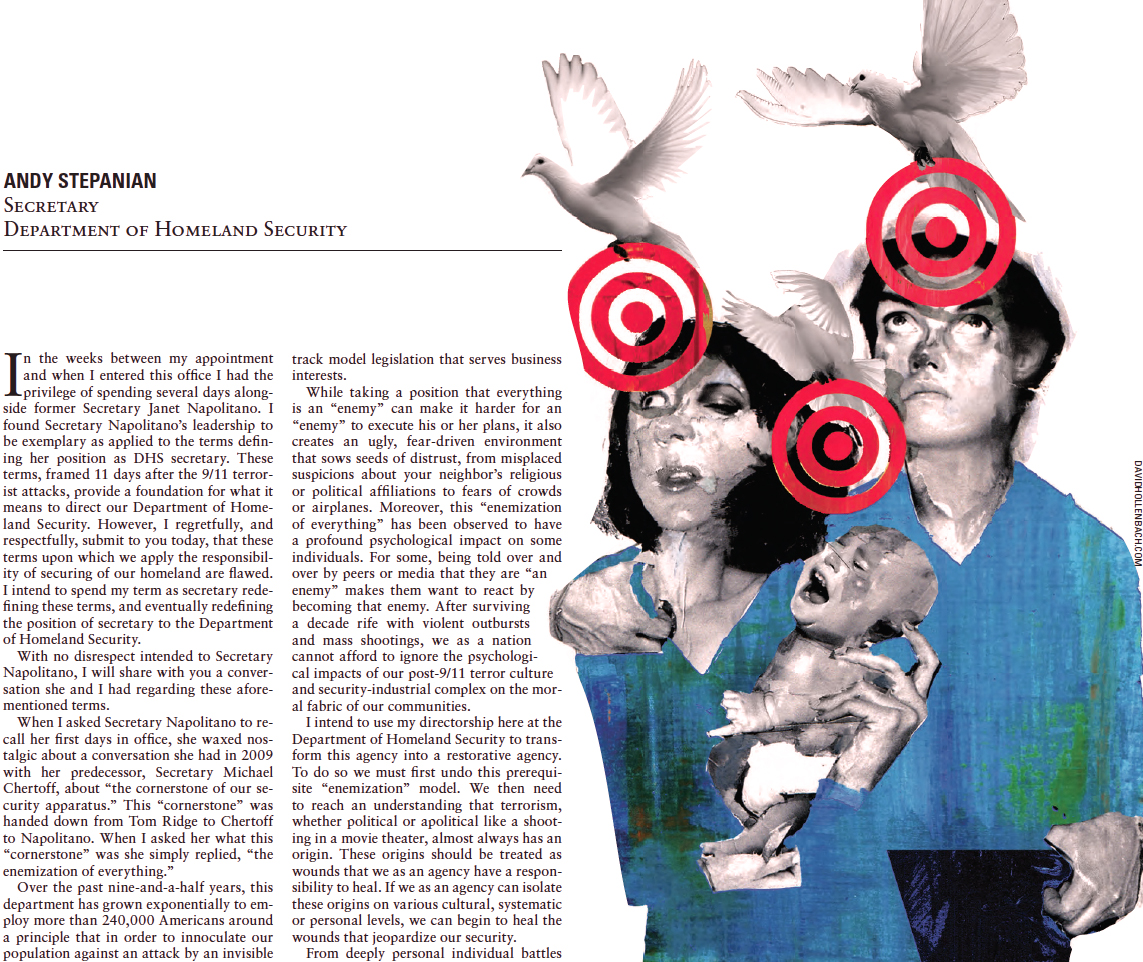 This beautifully illustrated special edition of The Indypendent is a powerful testimonial of the alternatives we can create. A list of distribution locations are available here, a .pdf download is available here.