[NEW YORK, NY]  On March 21st People from across the city and movements come together to stand in solidarity with the family of Trayvon Martin as they seek justice for the murder of their son. Organizers of the New York City protest are asking people from across the city to throw on their hoodie and join others in Union Square, NYC at 6:00pm as they demand justice for the murder of Trayvon Martin. Those that are unable to attend the event in New York City are asked to throw on their hoodies and share the story of both the life and death of Trayvon and his family’s fight for justice. JOIN US IN NYC – Throw on your hoodies and come gather in Union Square to show your support for justice for Trayvon Martin!

On February 26th Trayvon Martin who was 17 years old at the time of his death, was shot and killed as he walked to his father’s home from a convenience store in Sanford, Florida. Trayvon’s killer, the leader of a community “neighborhood watch” called the police to report a suspicious person when he saw Trayvon walking from the store. Trayvon a young black male was wearing at the time a hoodie and on his person was a bag of skittles and a beverage. Despite police instruction not to confront Trayvon, Zimmerman ignored instructions and followed Trayvon, cornering him and ultimately killing him. Zimmerman admitted to the shooting of Trayvon however has not been charged for the murder. 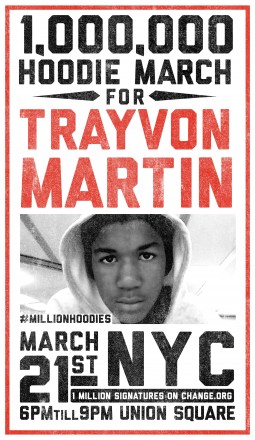 “We are tired of looking in the eyes of our brothers, our sisters, our children asking ourselves whose next? If you think tomorrow is about a protest, simply an assembly of people, you are wrong. Tomorrow, will be the night we remember the murder of Trayvon Martin and say, with one voice, never again,’” said Daniel Maree, a Digital Strategist at McCann, NY who launched the Million Hoodies event.911 recordings released of what many suspect is Trayvon pleading for help before he was shot to death, has inspired many to come together and protest the racial injustices that revolve both around Trayvon’s death and the freedom of his killer.  Many supporters of Trayvon’s family come together to express to the state of Florida and the world their outrage over the death of Trayvon Martin and to call for an end to racial profiling, racial injustice and the terrorizing of black and brown communities throughout the country.