[Seattle, WA] At 2:45pm PDT yesterday (October 10, 2012) a federal judge for Washington’s Western district ordered that Leah-Lynn Plante be remanded into federal custody for her refusal to provide federal grand jury testimony regarding activists in the Northwest. At 5pm PDT Leah-Lynn was moved to the Seattle-Tacoma Federal Detention Facility (SEATAC) where she is now being held in administrative detention and it is unclear if she will matriculate into general population or if she will remain in the Secure Housing Unit (SHU).

Leah-Lynn recorded a powerful statement yesterday regarding her expected detention. Her statement has also been attached as text below.

A subpoena called Leah-Lynn to appear in front an investigative grand jury earlier this year, yesterday was the third time Leah-Lynn had been compelled to appear before the grand jury and provide testimony. As part of a strategy to resist what Leah-Lynn saw as a fishing expedition into the names and affiliations of Northwest activists each time Leah-Lynn was called to the grand jury room she invoked her 1st, 5th, and 4th amendment constitutional protections. The prosecutor’s response to Leah-Lynn’s strategy and the strategy of activists Matt Duran and Kteeo Olejnik who were subpoenaed to the grand jury prior to Leah-Lynn was to order the judge to provide each of them immunity to self-incrimination if they provided testimony (side-stepping their tactic of pleading the 5th amendment).  The judge also made a ruling that evoking one’s 1st and 4th amendment privileges were not applicable in this matter.  Leah-Lynn’s resolve to not cooperate with the grand jury was then met by a contempt charge.

It is of the utmost importance that we as activists give our solidarity and support to those who have forfeited their freedom to protect the freedom of others. Please do everything you can to support their selflessness, organize benefits, letter writing parties teach-ins, solidarity demos outside of federal courthouses. You can donate to their legal defense here http://nopoliticalrepression.wordpress.com/donate/

Prison can be a very lonely place & writing a prisoner can provide much needed moral support. Here are the addresses for all three grand jury resisters: 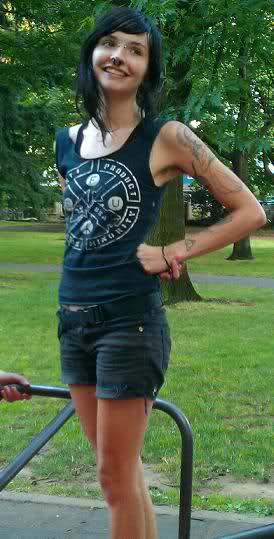 On the morning of July 25th, 2012, my life was turned upside down in a matter of hours. FBI agents from around Washington and Oregon and Joint Terrorism Task Force agents from Washington busted down the front door of my house with a battering ram, handcuffed my house mates and me at gunpoint, and held us hostage in our backyard while they read us a search warrant and ransacked our home. They said it was in connection to May Day vandalism that occurred in Seattle, Washington earlier this year. However, we suspected that this was not really about broken windows. As if they had taken pointers from Orwell’s 1984, they took books, artwork and other various literature as “evidence” as well as many other personal belongings even though they seemed to know that nobody there was even in Seattle on May Day. While we know that knowledge is powerful, we suspected that nobody used rolled up copies of the Stumptown Wobbly to commit property damage. We saw this for what it was. They are trying to investigate anarchists and persecute them for their beliefs. This is a fishing expedition. This is a witch hunt. Since then, thanks to a Freedom of Information Act request, we have learned that this Grand jury was convened on March 2nd, 2012, two months before the May Day vandalism even took place.

I was served a subpoena to testify before a Grand Jury on August 2nd, a week later. I hastily packed my life up into boxes, got rid of almost all of my personal belongings in preparation of incarceration. I was dismissed that day after refusing to testify and re-subpoenaed for August 30th, which was pushed back to September 13th. In that time I did a lot of self care, got my affairs in order and got advice from other people who have either resisted Grand Juries, gone to prison or both. I returned to the Grand Jury on September 13th where I was granted immunity. When you are granted immunity, you lose your right to remain silent and can be thrown into prison for civil contempt. Between consulting with my attorney and an hour long recess, I narrowly avoided a contempt hearing simply because they ran out of time. I was dismissed and was told I would receive my 4th subpoena. I walked out of the courthouse just in time to witness Matthew Kyle Duran, my fellow resister, being taken away to prison in a police van. It broke my heart to watch them kidnap an amazing and strong person and take him away from his friends and loved ones. Katherine “Kteeo” Olejnik has met a similar fate for refusing to testify on September 27th. Right now, Matt and Kteeo are both sitting in prison cells for doing nothing but remaining silent. I have nothing but love and admiration for them both and I know that thousands of others feel the same. On the drive home that night my brain felt like it was short circuiting. A few days later, I received notice that my next subpoena was for October 10th. They also notified my lawyer that they were preparing for a contempt hearing.

Court dates aside, my life has been a roller coaster. Thanks to unrelated events, I have suffered with severe depression and PTSD for many years. These are now much worse and new things trigger me. For a while after the raid, I was in a constant state of panic and I could barely eat. Every time someone knocked on the door, every time I heard any sort of loud sound in my house, my heart sank and I thought “they’ve come for me.” To the day of this writing, I haven’t slept a full night since that cold July morning thanks to nausea inducing anxiety that wakes me up between 4:00 and 7:00 every single morning. After a couple months, the initial panic has faded into grim acceptance. Despite my mental health issues, I never once considered co-operation and never would. It is against everything I believe in. On my right arm I have a tattoo reading “strive to survive causing least suffering possible.” This is something I live by every single day and will continue to live by whether I am in a cage or not.

I cannot express in words how grateful I am to all those who have shown us support and solidarity, especially our friends, partners and loved ones. We will all get through this together. I know I am a broken record with the following sentiment, but I feel like it’s worth repeating. They want us to feel isolated, alone and scared. I know that even though Kteeo has been held in what is essentially solitary confinement, she does not feel alone. I know that Matt does not feel alone. I know that I will not feel alone. When they try to mercilessly gut communities, we do not scatter, we grow stronger, we thrive. I view this State repression like this: The State thinks it is a black hole that can destroy whatever it wants. In reality, it is much more like a stellar nursery, wherein it unintentionally creates new, strong anarchist stars.

I do not look forward to what inevitably awaits me today, but I accept it. I ask that people continue to support us throughout this process by writing us letters, sending us books, donating and spreading awareness.

My convictions are unwavering and will not be shaken by their harassment. Today is October 10th, 2012 and I am ready to go to prison.

Love and solidarity to all those who resist,
Forever in silence.
Leah-Lynn Plante