Icelandic Parliamentarian, Birgitta Jonsdottir, will Visit NYC in Support of Bradley Manning Despite DOJ Grand Jury Investigation Into Her, Wikileaks

The panel discussion will feature Jonsdottir in conversation with Alexa O’Brien and Kevin Gosztola, journalists who each have provided extensive coverage of the Manning pretrial proceedings at Ft. Meade, MD, along with Peter Hart, a critic with the media watchdog group Fairness & Accuracy In Reporting. The panel will be moderated by Sam Seder, host of the political talk show, The Majority Report.

Jonsdottir’s visit comes on the heels of a February 2013 revelation by Iceland’s Justice Minister that, in August 2011, Icelandic lawmakers expelled several FBI agents from the country. An Alexandria, VA Grand Jury Probe is seeking information about Jonsdottir, among others, in relation to Wikileaks, its developers and managers, and Pfc. Bradley Manning. Despite advice from the Icelandic Government not to visit the US until the closure of the Grand Jury, Jonsdottir has chosen to schedule her visit amidst this still-active Grand Jury, citing the urgency of Pfc. Manning’s plight. As Manning’s court-martial trial is scheduled to begin on June 3, 2013, he faces a potential life sentence, if convicted on all counts.

Jonsdottir was instrumental in facilitating Pfc. Manning’s nomination for the Nobel Peace Prize, both in 2012 and again in 2013, with wider support. “I nominated Bradley Manning for the Nobel Peace prize for the first time in 2012 ,with a couple of fellow MPs from Iceland,” said Jonsdottir, “In 2013, I did it again with the same MPs, members from the European Parliament and a former Minster from Tunisia. It is very encouraging to see the growing support for Manning around the world, but most importantly, within the USA.”

Jonsdottir is also suing president Barack Obama over the indefinite detention powers within § 1021(b)(2) of the National Defense Authorization Act (NDAA). In September 2012, Judge Katherine Forrest of New York’s Southern District Court enjoined the President from using § 1021(b)(2) in a landmark ruling in favor of Jonsdottir and six other plaintiffs, citing that their work in activism, academia, and journalism could potentially put them at risk of detention under § 1021(b)(2). The Obama administration is currently appealing Judge Forrest’s ruling. 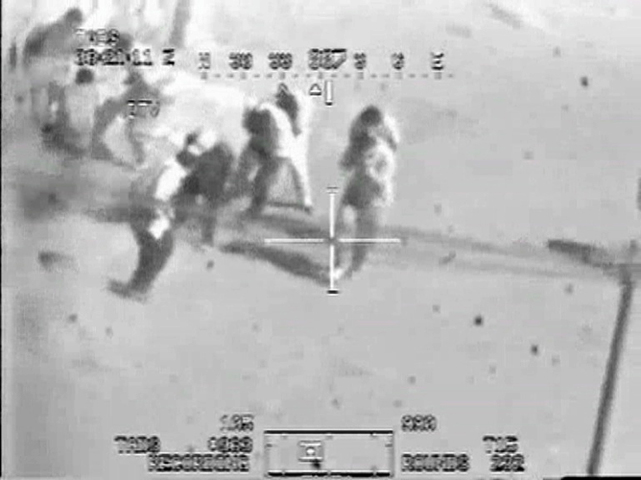 ↑ Large-format prints of single frames from the now infamous “Collateral Murder’” video (disclosed by Manning, published by Wikileaks and co-produced by Jonsdottir) depicting the killing of unarmed Iraqi civilians and two Reuters journalists by US Apache gunfire, will be displayed and sold in benefit of Pfc. Manning. 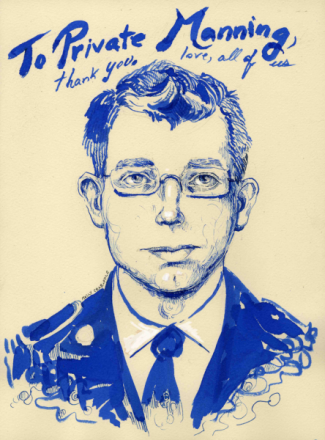 ← Limited-edition 17″ x 22″ giclée prints by celebrated social justice artist and illustrator, Molly Crabapple, will also be sold as part of the benefit. For those who want to support the benefit but cannot attend the New York City event on April 5th.  Crabapple’s prints are currently available online to bid upon HERE.  The first 200 highest bids will receive these prints.

The event aims to raise awareness about Manning, now 25 years old, who recently explained in a court statement that he leaked the documents as an act of conscience; to uncover U.S. abuse in Iraq and Afghanistan and to help people in America better understand wars abroad. The event also hopes to raise money for Bradley’s defense fund, a fund for the families affected by the massacre captured in the “Collateral Murder” video , and money for Ethan McCord, the soldier who helped save the children wounded in the attack.

To arrange an interview with Brigitta Jonsdottir while she is in the USA, please contact Andy Stepanian via email at andy@sparrowmedia.net or by phone at 631.291.3010