[GENEVA, SWITZERLAND]  The 1970 shooting of unarmed students at Kent State University will for the first time be brought before the United Nations Human Rights Committee in Geneva on March 10-14, 2014. Laurel Krause, whose sister Allison was among those killed at Kent State, will address the UNHRC at its 4th Periodic Review on Human Rights in America. She will be representing the Kent State Truth Tribunal (KSTT) that she founded to pursue truth and accountability for the Kent State shootings.

The Kent State Truth Tribunal (KSTT) is seeking US government accountability for the killing of four unarmed students and the injury of nine others by US military personnel on May 4, 1970 at a Kent State University anti-Vietnam war rally. The Kent State killings gained national attention in 1970 leading to mass protests and student strikes across the United States. Witnesses and historians have asserted a pronounced role by the FBI before and during the shootings, and command responsibility that pointed to Ohio governor James Rhodes’ collusion. In response to the surge of activism following Kent State, on May 5, 1970 President Nixon said: “This should remind us all once again that when dissent turns to violence it invites tragedy. It is my hope that this tragic and unfortunate incident will strengthen the determination of all the nation’s campuses, administrators, faculty and students alike to stand firmly for the right which exists in this country of peaceful dissent and just as strong against the resort to violence as a means of such expression.”

The KSTT will present its claims of a violation to the UN’s International Covenant on Civll and Political Rights (ICCPR) treaty by the US government related to Freedom of Assembly and the Right to Protest in America. The KSTT will ask the UNHRC to press the US to initiate a new and independent investigation into what occurred at Kent State, with a particular focus on forensic evidence that emerged in 2010. KSTT founder Laurel Krause said: “For 44 years the United States government has refused to admit that four young students, including my sister Allison, were killed at Kent State. There has never been a credible, independent, and impartial investigation into Kent State. Recent forensic evidence has revealed a Kent State order to shoot, suggesting command responsibility for the killings. We are asking the US government to independently examine this new evidence and provide accountability for this tragic and unsolved chapter in US history”. 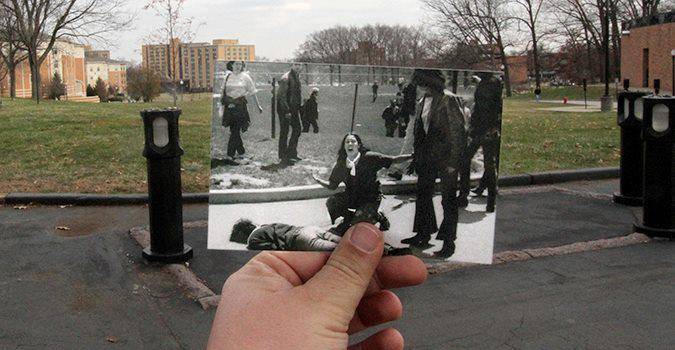 The United Nations Human Rights Committee is a body of independent experts that monitors implementation of the International Covenant on Civil and Political Rights by its State parties. Every five years UN-participating countries must participate with the UN Human Rights Committee in plenary session. This year during the week of March 10-14, 2014 and culminating on March 13 and 14, the United States will participate in its mandatory human rights review for activities over the last five years where non-governmental organizations may have their US human rights issues addressed.