Last Month I posted about the privatization of water through corporate control of municipal water systems.  As I mentioned in the previous post, the second way corporations are stealing our water is through bottling.   FLOW (For the Love of Water), a documentary which came out in 2008 brilliantly (and frighteningly) lays out the international water crisis, including the role of bottled water.   I would highly recommend everyone rent, borrow, or buy this film.  After watching it, I did a down and dirty post for Girlie Girl Army but here I’d like to dig a little deeper. 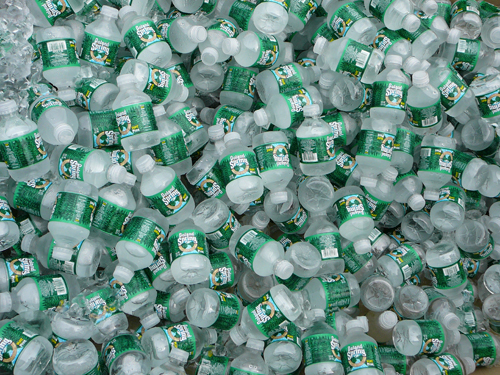 As you probably already know bottled water is terrible in numerous ways.  It’s no safer (and in some cases, less safe) than tap water, much worse for the environment in many way than tap water and a gigantic waste of money.  In the U.S. and abroad Nestle, Coca-Cola and PepsiCo are the chief corporations creating a false demand for bottled water by making people think it’s healthier and safer than water from the tap.  It’s a masterful marketing campaign the opposite is often actually true.  Then again, usually when a corporation tells us anything it’s probably safe to assume the reverse. Tap water is subject to state and federal safe drinking water standards by the Environmental Protection Agency, whereas bottled water is far less regulated because it’s done so by Food and Drug Administration.

More than just the plastic waste created with every bottle of water tossed in the trash after drinking, the making of plastic bottles and transporting the water-filled bottles all across the country takes a lot of energy and creates a lot of pollution.  Although this is of course an argument against all plastic containers, remember, the same water already comes out of the faucet.  The infrastructure for drinking water out of the tap already exists and it’s a lot more eco-friendly!  No plastic waste, no trucks driving water all over the place.  Its genius but unfortunately municipal water bureaus don’t have millions of ad dollars to market tap water the way Coca-Cola can market Dasani.

On top of the waste created from plastic production, shipment and destruction, corporations often devastate the environment to extract water at an alarming rate.  Nestle is a notorious offender.  In 2003, Nestle after failing in Wisconsin, set sights on Michigan and set-up a bottling plant, extracting groundwater at the rate of 400 gallons per minute.  Citizens won in court claiming that the pumping had a negative effect on the environment but Nestle appealed and continues to pump water while the legal battle with Michigan Citizens for Water Conservation continues.

Finally, bottled water is a huge waste of money for the consumer (hopefully at least after reading this, not you) and communities. Buying bottled-water perpetuates the falsehood that it is safer than tap water and diverts concern (and eventually dollars) away from municipal water systems.  In my other post about bottled water I mistakenly said that when you buy bottled water you are paying for what you could get at home for free.  That’s not true of course, municipally-owned water you get from the faucet is not free to you or the government, it actually costs millions of dollars for government to provide safe and clean drinking water.  But that is still a fraction of the cost of bottled-water and corporate-controlled tap water.

To learn more on the ills of bottled water you can read the Take Back the Tap report.  In it, you’ll find the many local groups are fighting big corporations’ bids to set up bottling plants in their communities.  Additionally, groups like Food and Water Watch and Corporate Accountability International are helping convince individuals, governments, restaurants, campuses and stores to move away from bottled water and start offering tap water.  Both have many resources on their sites if you want to help.   Sometimes all you have to do is ask, or not even.  I’m so happy to report that after my friends who run Food Fight Grocery! in Portland, OR read my other piece on bottled water they stopped selling it altogether and instead now offer free water that customers can fill up reusable bottles with (thanks guys!)

Food and Water Watch suggests that it’s not enough to simply give up bottled water and they advise that government at every level needs to protect our sources of water as well devote needed dollars to drinking and sewer water systems.  I agree but would add that giving up bottled water is a great first step that everyone can take. Right now.  More than immediately decreasing demand for the product, when you buy and carry around plastic water bottles, you send a message that it’s an acceptable product.  So, go rent FLOW, learn more about the global water crisis in general, and take the pledge to give up bottled water.

The Corporate Theft of Water